Independent-minded and willing to buck the party line 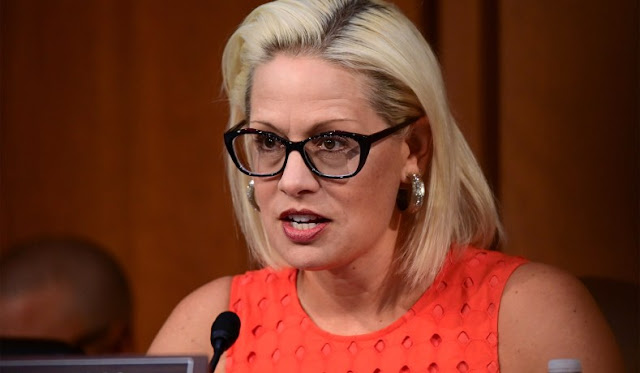 In a recent interview with Politico, Democratic senator Kyrsten Sinema of Arizona said that she’d oppose nuking the Senate’s legislative filibuster if Democrats were to retake the upper chamber. Not only that, but Sinema says she’d like to undo what Democrats did last time they held the Senate, when they removed the supermajority requirement for confirming presidential nominees.

“They will not get my vote,” Sinema told Politico. “In fact, whether I’m in the majority or the minority I would always vote to reinstate the protections for the minority.”

It’s just the latest example of how Sinema isn’t afraid to buck the party line and vote against her Democratic colleagues. Here’s more from Politico:

It’s an approach that has the potential to revive the Senate’s moribund middle but has left her something of a mystery to her Democratic colleagues, even fellow moderates. . . .

“Everyone knows that I am very independent-minded,” [Sinema] said. “And that it’s not super useful to try and convince me otherwise.”

She’s also been willing to work across the aisle. Earlier this summer, she introduced a paid-parental-leave plan with Louisiana Republican Bill Cassidy, which would allow parents to draw forward up to $5000 from their child tax credit in the first year after the birth or adoption of a child. Many of her fellow Senate Democrats, meanwhile, are backing the FAMILY Act, which would create a new entitlement program and raise the payroll tax to fund paid-family leave, paid-parental leave, and paid personal medical leave.

The first Democrat elected to national office in Arizona in more than three decades, Sinema seems to know it makes sense to carve out a moderate path, much like West Virginia Democrat Joe Manchin. But it has earned her the ire of some Democrats in Arizona, and the state’s progressive caucus came close to formally censuring her last month, claiming that she’s aligned herself too closely with President Trump’s positions.

For now, her heterodoxy hasn’t seemed to cost her much. In fact, given voting patterns and public opinion in Arizona, Sinema is likely doing exactly what she needs to in order to retain support.