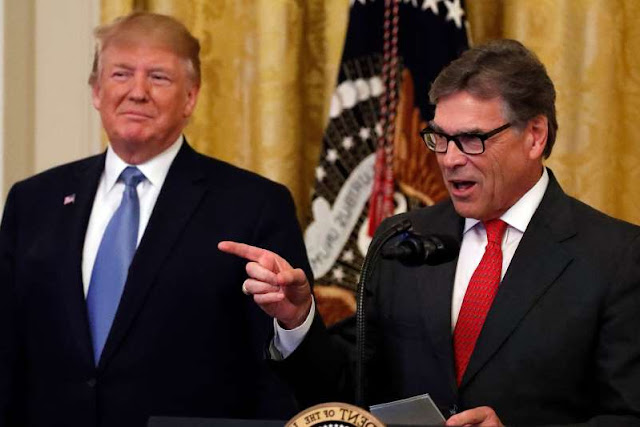 Perry is the latest Trump administration official to be issued a subpoena as part of House Democrats' impeachment inquiry, which is examining the president's efforts to persuade the Ukrainian government to investigate Biden, a leading Democratic presidential contender.

“Recently, public reports have raised questions about any role you may have played in conveying or reinforcing the President’s stark message to the Ukrainian President,” the chairmen of the three committees leading the House inquiry wrote to Perry.

Leaders of the House Intelligence, Foreign Affairs and Oversight committees are demanding that the Energy secretary hand over the requested documents by Oct. 18.

The subpoena comes after the White House on Tuesday told Speaker Nancy Pelosi (D-Calif.) and the three Democratic committee leaders in a letter that it would not cooperate with the ongoing impeachment probe.

The subpoena issued Thursday demands that Perry hand over all documents and communications related to any Energy Department preparations for Trump's July 25 call with Ukrainian President Volodymyr Zelensky, in which Trump urged Ukraine to investigate Biden.

Volker, who testified before the committees last week, said that the delegation later met with Trump to discuss their visit to the country.

The three House panels are further demanding documentation of Perry's reported efforts to urge the Ukrainian president to replace members of the board of Naftogaz, Ukraine's state gas company. The Associated Press reported that one of the preferred candidates offered by Perry, a former Texas governor, was a former political donor.

In addition, the subpoena includes a request for evidence of "all meetings or discussions" with Trump's personal lawyer, Rudy Giuliani, who played a key role in urging Ukrainian officials to launch an investigation into Biden and his son Hunter.

Trump and his GOP allies have criticized the former vice president for pushing for a top Ukrainian prosecutor to be fired in 2016. The move came as Joe Biden's son served on the board of Ukrainian energy company Burisma, which had come under scrutiny in Ukraine.

The Perry subpoena comes after White House counsel Pat Cipollone wrote to the committee chairman and Pelosi earlier this week announcing that the Trump administration would not comply with the impeachment inquiry. Cipollone cited the lack of a formal House vote to authorize the impeachment inquiry similar to those that had been done during the investigations into former Presidents Bill Clinton and Richard Nixon.

Axios reported that Trump told House Republicans during a conference call that he made the call with Zelensky at Perry's urging because of "something about an LNG [liquefied natural gas] plant," claiming he didn't want to make the call.

The subpoena to Perry comes hours after the committee chairmen issued subpoenas to two of Giuliani's business associates who had been arrested on Wednesday at Dulles International Airport as they tried to leave the country. The two businessmen, Lev Parnas and Igor Fruman, were arrested on campaign finance charges.

The subpoenas to Parnas and Fruman demand documents and testimony regarding their roles in helping Giuliani pressure Ukrainian officials to open an investigation into the Bidens. The committees had previously asked the two businessmen for documents and to appear for depositions on Capitol Hill this week, but their lawyer said that they would not comply.

“Your clients are private citizens who are not employees of the Executive Branch. They may not evade requests from Congress for documents and information necessary to conduct our inquiry. They are required by law to comply with the enclosed subpoenas. They are not exempted from this requirement merely because they happen to work with Mr. Giuliani, and they may not defy congressional subpoenas merely because President Trump has chosen the path of denial, defiance, and obstruction,” the chairmen wrote in a letter to John Dowd, the lawyer for Parnas and Fruman.

Aside from Perry and Giuliani's business associates, the three committees have issued subpoenas to the White House, Pentagon, State Department and Office of Management and Budget in recent days.