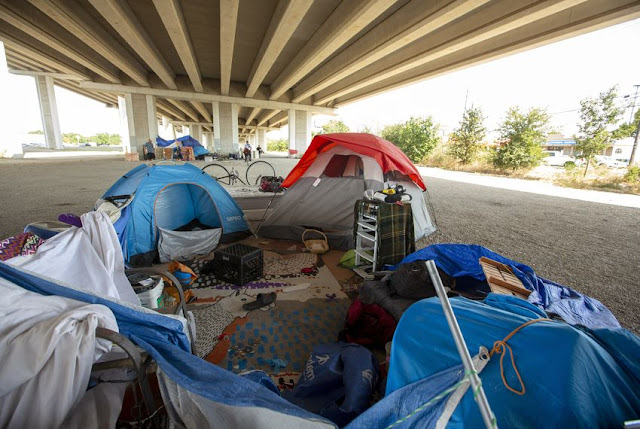 Gov. Greg Abbott's office said Friday the Texas Department of Transportation will clear homeless encampments from under bridges and overpasses in Austin.

Abbott plans to work with homeless shelters in Austin, according to a statement from a spokesman, but he did not provide more details about when or how the camps will be cleared.

The announcement comes less than a day after the Austin City Council changed its ordinances regarding camping, sitting and lying in public spaces. Camping is now banned on city sidewalks, near homeless shelters in and around downtown, and in high wildfire risk areas. Sitting and lying are no longer permitted within 15 feet of the entrance or exit to a business or residence.

“By reforming its homelessness policy, the city of Austin has taken a meaningful step to address the safety and health of Texans — including the homeless,” Abbott spokesman John Wittman said in a statement Friday afternoon. “The state will monitor how well the new policy actually reduces the skyrocketing complaints about attacks by the homeless and other public safety concerns. The state will also continue to monitor water quality for e-coli and other bacteria.”

The city's change will go into effect Oct. 27, four days before a deadline Abbott gave Austin officials to make a "consequential improvement" with what he called a homelessness crisis in the state's capital. That deadline and this week's changes follow the council's controversial decision earlier this year to relax some ordinances that critics said criminalized homelessness.

News of TxDOT's plans, which the Austin American-Statesman first reported, broke as Austin Mayor Steve Adler met with the media. Adler said he had not communicated with the governor, but that it had been suggested to him that Abbott would move people out of encampments under overpasses near state roads.

“I hope he doesn’t do that unless he has somewhere for those people to go,” Adler said, adding that he doesn't want people living under overpasses, but he doesn't want them moved into less public spaces like the woods, either.

Adler also said that he hopes the governor provides people experiencing homelessness with “a housing exit” should Abbott choose to move people into shelters.