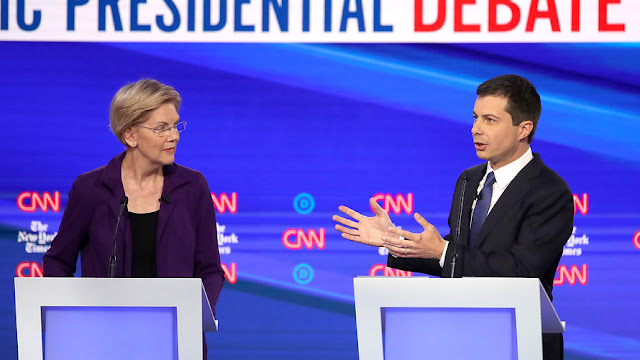 Sen. Elizabeth Warren (D-Mass.) came under fire from several of her Democratic rivals at Tuesday's primary debate, reflecting her newfound front-runner status and testing her ability to weather criticism.

A handful of contenders took turns criticizing Warren over everything from her support for "Medicare for All" to her oft-repeated call for an additional tax on the wealthiest Americans.

At one point, former Rep. Beto O’Rourke (D-Texas) described the Massachusetts senator as “more interested in being punitive” than in uniting a divided country.

“I think we need to be focused on lifting people up,” O’Rourke said. “Sometimes I think that Sen. Warren is more focused on being punitive and pitting one part of the country against the other.”
Likewise, Sen. Amy Klobuchar (D-Minn.) accused Warren of casting herself as the only candidate on stage willing to stand up to the ultrawealthy. Rather, she argued, the candidates simply have different approaches to tackling the issues facing Americans.

One of the most heated exchanges of the evening came during a discussion over health care and Medicare for All, the single-payer health care system proposed by Warren and Sen. Bernie Sanders (I-Vt.).

When Warren punted on a question about whether such a health care model would require raising taxes for middle-class Americans, South Bend, Ind., Mayor Pete Buttigieg went on the attack.

“A yes or no question that didn’t get a yes or no answer,” Buttigieg said of Warren’s response. “Your signature, senator, is to have a plan for everything — except this.”

The barrage of attacks is reflective of Warren’s top-tier status in the Democratic primary contest. She’s steadily climbed to the top of polls in recent weeks, in some cases even surpassing former Vice President Joe Biden, the longtime front-runner.

She also raked in one of the heftiest sums of campaign cash in the third fundraising quarter of the year — roughly $25.6 million. Only one other candidate, Sanders, pulled in more money in the past three months.

The attacks also showcased an emerging reality in the primary contest: Warren, not Sanders, is now seen by her opponents as the most formidable progressive in the race.

At the same time, some of Warren’s lower-polling opponents at Tuesday night’s debate — namely Buttigieg, Klobuchar and O’Rourke — are in desperate need of a boost.

Klobuchar and O’Rourke have lingered in the low single-digits in public polls for months, while Buttigieg, who saw success early on in the primary contest, has declined over the past several months.

For her part, Warren was aggressive in defending herself from her critics, arguing that Democrats should aspire to bring about sweeping political and economic change rather than resign themselves to more incremental policy adjustments.

Her performance also showed that, even with her newfound frontrunner status, she is capable of fending off aggressive criticism.

“I think as Democrats we are going to succeed when we dream big and fight hard, not when we dream small and quit before we get started,” Warren said.