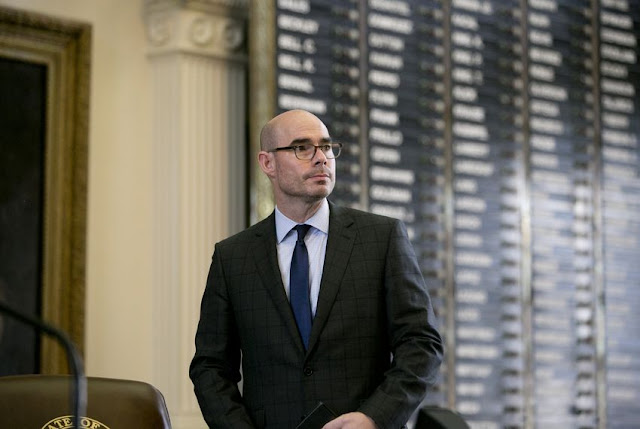 The question isn’t whether Texas House Speaker Dennis Bonnen will be out of a job.

Every speaker of the Texas House has a limited tenure, of course. Some last 10 years, like Joe Straus, Pete Laney and Gib Lewis. Most don’t make it that far. If Bonnen’s current troubles multiply, he could survive less than a full term.

He’s been in the job for less than a year. Members of both parties are backing away from the unanimous support they gave him in January, spooked by his raw language and political scheming in an hourlong conversation with a political activist named Michael Quinn Sullivan.

House Democrats met after the recording was out and didn’t have Bonnen on their agenda. That kept them from acting on it, but it didn’t keep them from talking. And several of the participants said no one at the meeting spoke up for the speaker. As the House Republican Caucus met Thursday and Friday, several members said Bonnen should either give up the top job or give up his place in the Legislature altogether.

There’s no way, when the House is not in session, to force a leader out of the speakership, which is essentially what that caucus said in a statement that also said members "condemn in the strongest possible terms the offensive language used and the statements made." Without the means (and possibly the will) for a force play, members decided not to censure or demand anything of Bonnen. Speakers can resign for any reason at almost any time, but it’s hard to compel them to leave. It’s hard even when the House is in session, as opponents to then-Speaker Tom Craddick found when they attempted a coup in 2007.

But the House isn’t scheduled to return to Austin for official business until January 2021. Without a special session called by Gov. Greg Abbott (mark that as unlikely) or a resignation from Bonnen (ditto, without a major change of heart), he’ll be in the job until the next regular session.

All he has to do is keep the members of the House — 67 Democrats and 83 Republicans, including himself — from turning Bonnen’s costly mistake into something that turns the heads of voters in the 2020 primary and general elections.

The risk is almost all on the Republican side of the ledger, and the options are limited. If Bonnen were to leave soon, the conventional wisdom is that the speaker pro tempore would succeed him as interim speaker. Two immediate problems: That’s a legally murky line of succession, and the current pro tempore is Joe Moody, an El Paso Democrat. Whoever has the job in the case of a Bonnen departure — Moody or a Republican named by Bonnen to replace him — will be in a legal fight over the claim to the gavel.

If Bonnen stays in office until the 2021 session, Republicans would be betting that they would survive any fallout from his hourlong bull session last June with state Rep. Dustin Burrows, R-Lubbock, and Sullivan, head of Empower Texans, a conservative outfit known for antagonizing establishment Republicans.

Either way, the recording and the controversy about what Bonnen and Burrows said and the way they said it will be a continuing feast for the Democrats, giving them a Texas foe to rail against, and raise money against, to add to their preexisting plans to spend a year talking about President Donald Trump. For 2020, they’re in position — as the Republicans were during the Obama years — to run against the majority party in Washington.

The Republicans have other risks. A quick exit could set up a fight over succession and continuing public attention on something they’d rather have the public forget. A long goodbye could keep up the current controversy about which members are on which political hit lists, or about whether incumbent members of the House — mostly Republicans, but Bonnen has Democratic supporters, too — continue to support an embarrassing leader.

Oh, and there’s that government to run. The House isn’t in session, but members are waiting for the speaker to make the interim assignments that tell committees what to work on in advance of the next session, the important homework that makes it possible to pass thousands of bills in just 20 weeks every two years. There’s a state budget to work on, and, come to think of it, the chairman of the budget-writing Appropriations Committee resigned to take a university job and hasn’t been replaced.

Bonnen won this job before the last session, pulling together a coalition of Republicans and Democrats at about this time a year ago. He started with confidence and got to the end of the session, along with Abbott and Lt. Gov. Dan Patrick, with most things on his to-do list checked off.

Everything was great, with all of the marks of the beginning of a long and fruitful speakership.

The last thing on anyone’s mind was when it might end.