Democrats take to the stage for latest presidential debate 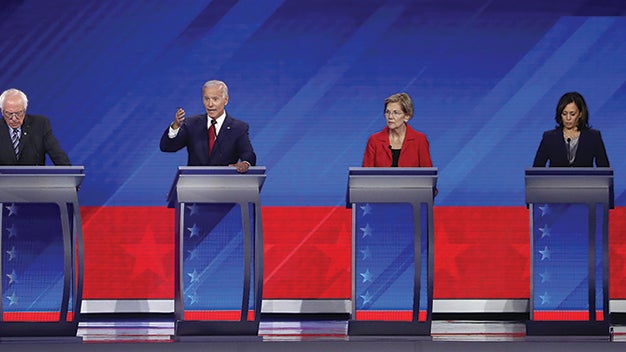 Twelve Democratic presidential hopefuls will descend on Otterbein University on Tuesday for the fourth primary debate.

The forum, the largest Democratic debate to date, comes as Sen. Elizabeth Warren (D-Mass.) emerges as the candidate with the most momentum after surging ahead of former Vice President Joe Biden in recent polls.

Biden, though, is still seen as a top contender even as he has found himself mired in the contentious impeachment inquiry into President Trump.

The debate will also mark Sen. Bernie Sanders’s (I-Vt.) return to the campaign trail after he suffered a heart attack earlier this month, at a time when he appears to have lost some momentum in the polls.

Here are five things to watch in the debate.

Will rivals go after Warren?

Tuesday’s debate will mark the first where Warren is on the stage as a front-runner after overtaking Biden in national polls as well as in some surveys in states like Iowa and New Hampshire.

Warren’s momentum could make her vulnerable to attacks from the 11 other candidates on the stage. Biden and Sanders, considered her top rivals, have already signaled that they are ready to hit Warren on the debate stage.

Biden last week appeared to take a swing at Warren’s strategy of unveiling a slew of detailed policy proposals, saying “we’re not electing a planner.”

Meanwhile, Sanders, who has avoided taking Warren head-on so far during the debate, appeared to try to differentiate himself from his fellow progressive senator, calling her “a capitalist” and describing himself as “the only candidate” who is going to push back against “the ruling class of this country.”

The race’s mid-tier candidates, like Sen. Kamala Harris (D-Calif.) and South Bend, Ind., Mayor Pete Buttigieg (D), could also look to stand out by going after Warren. Harris experienced a brief surge in the polls and in fundraising after hitting Biden during the first Democratic debate in June, though she was unable to sustain that momentum.

Can Bernie reassure after heart attack?

The debate will mark Sanders’s first major public appearance since suffering a heart attack this month. Sanders has said he is resting comfortably at his home in Burlington, Vt., and has opened up about his recent health issues, injecting a more personal touch to his campaign.

Sanders, 78, said last week he was “dumb” not to pay more attention to his symptoms amid his strenuous campaign schedule.

Sanders could use the debate to further provide reassurances that he is physically fit enough for the White House and address the issue head-on, at a time when there are already concerns about his age.

The senator’s campaign manager, Faiz Shakir, said that the campaign’s strategy after the health scare is to be as transparent as possible about the situation.

The debate comes at a critical time for Sanders, who gained a loyal following in 2016 with his insurgent campaign against eventual nominee Hillary Clinton.

But Sanders has seen his momentum stall in the polls as he is overtaken by Warren, a fellow progressive who has proven more successful at capturing attention so far.

A Quinnipiac poll this week showed Biden and Warren running neck and neck among Democratic primary voters and Democratic-leaning independents, while Sanders trailed far behind at 11 percent.

How do Democrats handle Trump’s attacks on Biden?

Biden has been forced to contend with a series of unproven allegations from Trump, who has claimed the former vice president thwarted a Ukrainian prosecutor’s investigation into an energy company that employed Biden’s son Hunter as a board member.

Biden has strongly denied that, saying the Obama administration sought to remove the prosecutor over concerns about corruption.

Trump’s attacks come as the president is facing an impeachment inquiry sparked by a whistleblower’s allegations that he sought to pressure Ukraine to investigate Biden.
Democratic candidates have mostly defended Biden so far in the face of Trump’s attacks amid worries that Trump’s campaign could be adopting the same playbook used to attack Clinton over her use of a private email server while secretary of State.

Buttigieg told CNN last week that Biden’s son was being held to different standards than Trump’s own children, while Warren has hit Facebook for not removing ads from the Trump campaign featuring baseless allegations about Hunter Biden’s work in Ukraine.

But Democratic candidates will still need to find ways of drawing contrasts with Biden, who retains strong support among key Democratic constituencies like African Americans.

Do Democrats give more momentum to impeachment push?

The forum will mark the first debate since House Speaker Nancy Pelosi (D-Calif.) announced a formal impeachment inquiry into Trump, which will likely force the contenders to address the issue on stage.

Most contenders have already vocally thrown their support behind impeachment. Biden was the latest to do so in a forceful speech denouncing Trump last week.

Rep. Tulsi Gabbard (D-Hawaii), who voiced her support for an impeachment inquiry late last month, has offered a more cautious approach to the issue and called out her opponents for fundraising off of impeachment.

The debate will also feature billionaire Tom Steyer, who made his name by calling for Trump’s impeachment, though he has sought to broaden his candidacy as a fight against corporate corruption since entering the race.

Twelve candidates are on stage. Will some of them come back?

The forum will be the largest single primary debate yet, with 12 candidates, and will also feature the most women on a single debate stage in U.S. history, according to Gender on the Ballot.

However, the field could significantly shrink between Tuesday’s debate and the next one in November after the threshold to qualify was increased by the Democratic National Committee.

Steyer, Biden, Sanders, Warren, Harris and Buttigieg, along with businessman Andrew Yang and Sen. Cory Booker (D-N.J.), are the eight candidates to have qualified for the November debate so far.

The tougher criteria for the next debate will raise questions about whether candidates like Sen. Amy Klobuchar (D-Minn.) and former Housing and Urban Development Secretary Julián Castro can get a spot after making it to the stage this month.