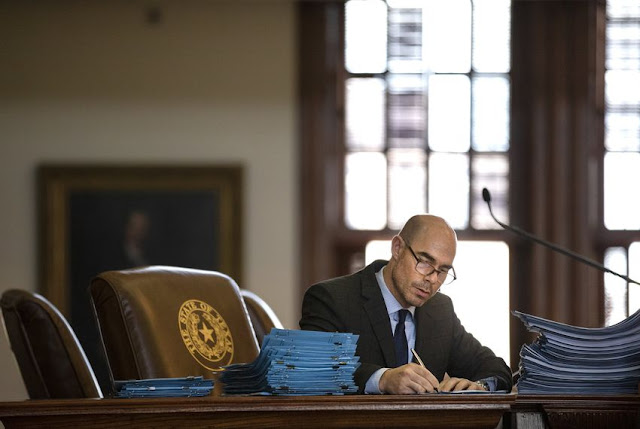 The math was effectively the same, but a few months ago, Texas Republicans had ample reason for optimism that they could hold on to their nine-member majority in the state House.

Under new Speaker Dennis Bonnen, R-Angleton, members had just ended their session with dual victories on property tax and school finance reform, issues ripe to be sold in battleground districts. Bonnen had warned lawmakers from both parties — by all appearances, effectively — not to campaign against one another, tamping down on challenges that could tip the balance of power in the chamber. And by mid-July, Bonnen had launched a new group to defend the majority, seeded with $3 million of his own campaign money.

Almost all of that came unraveled Tuesday morning, when Bonnen announced he would not seek reelection — and thus not return as speaker — amid the months-long fallout from a secretly recorded meeting with conservative activist Michael Quinn Sullivan. Now, Republicans are faced with battling emboldened Democrats for control of the lower chamber as their leader assumes lame-duck status, more politically toxic than ever at a crucial time for his party.

"The quarterback and coach have been taken off the field," said Bill Miller, a longtime Republican lobbyist. "It's short notice, it's a big leadership change, and they don't have a lot of time. It's problematic for Republicans."

One of the more obvious questions is what happens to Texas Leads, the political action committee that Bonnen unveiled in July to help keep the majority — and touted in his conversation with Sullivan. Bonnen started the group with $3 million transferred from his own campaign, which saw a seven-figure flood of donations after he emerged late last year as the likely next speaker. Bonnen promised an "ongoing commitment" to the PAC, though its first campaign finance report is not due until January, so it is unclear how much more he raised since the PAC's July launch.

In any case, the money now carries the stain of Bonnen's scandal — “I don’t see how any of us could take any money from him,” recently remarked a member targeted in the Sullivan recording — and likely would only make a race more complicated. Still, Democrats are not taking any chances.

"I can give you 3 million reasons why Democrats are not gonna let their guard down going the 2020 election cycle," said state Rep. Trey Martinez Fischer, D-San Antonio, who Bonnen referenced in the recording while talking about his rule against member-versus-member campaigning. "Speaker Bonnen's announcement is by no way a message that Democrats can take the day off. We have a lot of work to do."

On the Republican side, Bonnen's retirement means the work to defend the majority — at least for now — could fall to allied Republican groups, as well as Gov. Greg Abbott's massive political operation. Abbott seemed to acknowledge as much in a Tuesday morning statement on Bonnen's decision that urged state Republicans to come together to keep the House red — and promised the governor was "redoubling" his efforts to do so.

During a speech a couple hours later in Austin, Abbott made clear how significant of a role he plans to play in keeping the chamber in GOP hands.

"For the next year, I am campaigning as though I am on the ballot myself," Abbott told the Texas Oil and Gas Association. "I'm gonna be working in collaboration, in support of, the House members who made this past session so successful. I will be working day in, day out, to make sure they get reelected, knowing that the future of Texas itself is at stake."

In addition to the fate of Texas Leads, uncertainty abounds about Bonnen's end-of-session threat of consequences for members who campaign against other members. Bonnen's edict was already undermined by comments he made in the recording, but his decision to not seek reelection only further invalidated his self-appointed role as political disciplinarian.

"I don't think that Speaker Bonnen — and we heard it on the tape — I don't think he ever was sincere about that edict," said Royce Brooks, executive director of Annie's List, which works to elect Democratic women at the state level who support abortion rights.

Brooks and other Democrats involved in House races said Tuesday it was full steam ahead regardless of Bonnen's political standing throughout the rest of the cycle. For Annie's List, that means following through on its plan to have female nominees in at least 20 of the 29 seats that it believes are in play.

To be sure, it was not all doom and gloom Tuesday for Republicans, who hope that while Bonnen is not immediately going away, the all-consuming focus on the scandal will begin to recede. Expressing frustration that the session’s policy wins were “overshadowed by political discord” for three months, Rep. Justin Holland, R-Rockwall, said in a statement Tuesday morning that it is now "time for Texas House Republicans to be able to fully celebrate and promote the good work we accomplished in Austin this year."

Plano Republican Jeff Leach, a Bonnen ally who Democrats are targeting in 2020, said: "Jeff Leach is on the ballot in HD67. No one else. I am confident in my record serving my district and look forward to a vigorous campaign focused on what we’ve accomplished together as well as the challenges ahead of us. … We are going to win and lead the Texas House forward in 2021."

Still, it may be hard to ignore the elephant in the room, and the speaker could prove a liability on multiple fronts in both primaries and general elections. For starters, incumbents could be pushed to answer for their ties to the speaker, who made in-kind donations for polling to a dozen vulnerable members in June. They could also face scrutiny for how quickly they spoke out — or did not — about the scandal.

In one example Tuesday, one of the primary opponents to Rep. J.D. Sheffield, Shelby Slawson, blasted the Gatesville Republican for waiting to personally weigh in against Bonnen until after he announced he was not seeking reelection. The district, Slawson said, needs a "courageous leader with the tenacity to lead from the front."

Both in March and November, races could also see replays of Bonnen's comments in the recording disparaging local officials as "dumb ass" for even meeting with him and promising to make the 2019 session the "worst session in the history of the Legislature for cities and counties." In a sign of the comments' political potency, they drew some of the first and sharpest responses from members, who scrambled to impress upon mayors and county judges in their districts that they disagreed with the speaker.

Democrats did not have to wait long Tuesday to see how Bonnen's retirement would play in the first race that matters for the majority fight: the Nov. 5 special election to replace former Rep. John Zerwas, R-Richmond. Democrats are making a big push to flip the seat, and the campaign of the sole Democratic candidate, Eliz Markowitz, sent out a fundraising email Tuesday afternoon that focused on Bonnen's trashing of local governments.

"We can’t be a state that allows for the suffering of local communities in the name of advancing a political agenda," the email said. "That’s the kind of dysfunction Eliz is running to get rid of when she gets to Austin."