A few things to know about Trump, Turkey, and the Kurds 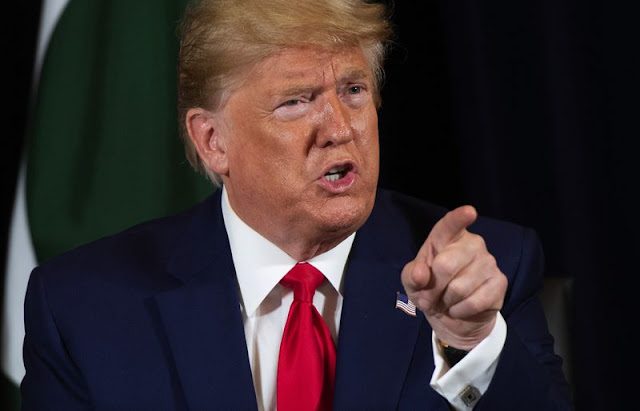 President Trump has ordered U.S. military forces to retreat from northeast Syria, paving the way for Turkey to proceed with a long-planned offensive against Syrian Kurdish forces that were instrumental in the fight against ISIS.

The administration downplayed the significance of the withdrawal, but it was immediately blasted by lawmakers across the political spectrum, including several Republicans who are typically aligned with Trump.

Amid the pushback, U.S. officials insisted that Trump was not endorsing the Turkish operation. But critics argue Trump is abandoning a U.S. ally to be slaughtered by Turkey — all while fueling chaos in the region that could allow ISIS to thrive anew.

There’s also a question of what will happen to the thousands of ISIS detainees being held by the Kurds as they shift their resources to battling Turkey.

Here are five things to know about Trump’s decision.

Ankara views the Kurdish forces known as the YPG as an extension of a Turkish Kurdish insurgency and has long threatened to launch an assault against them.

It has not done so previously because of the presence of U.S. troops in the area. The YPG has led the Syrian Democratic Forces (SDF), which have worked closely with the U.S.

Trump spoke to Erdoğan on Sunday before making his decision.

It’s the second time Trump has acted to leave Syria after talking with Erdoğan; Trump’s December announcement on withdrawing from Syria came days after a phone call with Erdoğan in which Trump reportedly told Erdoğan that Syria was “all yours.”

A senior administration official insisted to reporters Monday that Trump was not giving Turkey a “green light” to invade Syria and that the move “does not constitute a withdrawal from Syria.” Of the roughly 1,000 U.S. troops in Syria, the official said just about 50 to 100 special operators will be moved to other bases in the country.

But in tweets defending his decision Monday, Trump said it is time to end “ridiculous endless wars.” And minutes before the senior administration official spoke with reporters, Trump told reporters in the Roosevelt Room at the White House that “it’s time to come back home.”

Kurdish officials accused the president of stabbing them in the back, and prominent figures in the United States warned a withdrawal would serve as a warning to potential future partners.

To placate NATO ally Turkey, the U.S. was already working on establishing a safe zone along the border, and the SDF had removed their defenses from near the border.

But with no solid safe zone set and the United States now leaving the border area, SDF spokesman Kino Gabriel told Arabic TV station Al Hadath that Trump’s decision was a “stab in the back,” while another SDF spokesman, Mustafa Bali, tweeted that “people here are owed an explanation.”

The SDF said more than 11,000 of its troops were killed in the battle against ISIS, but Trump appeared to downplay the Kurdish role.

“The Kurds fought with us, but were paid massive amounts of money and equipment to do so,” he wrote.

Later in the day, after widespread backlash from Republicans and Democrats, Trump said he would “obliterate” Turkey’s economy should it do anything he considers to be "off limits."

A follow-up tweet did not mention protection of the Kurds but rather the need for Turkey and others to “watch over the captured ISIS fighters and families.”

The Pentagon has long opposed a troop pull-out

Trump’s decision came despite opposition from Pentagon leaders who have long said it was important to keep U.S. forces in northern Syria to prevent an ISIS resurgence and back Kurdish allies in the face of Turkish aggression.

As recently as Saturday, U.S. European Command was touting the implementation of the safe zone to forestall a Turkish incursion.

The Pentagon released its own statement on Monday that insisted the United States is not endorsing the Turkish operation despite the pullout.

“The Department of Defense made clear to Turkey — as did the president — that we do not endorse a Turkish operation in northern Syria. The U.S. Armed Forces will not support, or be involved in any such operation,” chief Pentagon spokesman Jonathan Hoffman said in the statement.

When Trump first announced his plan to pull troops from Syria nearly a year ago, the move prompted then-Defense Secretary James Mattis to resign.

Defense Secretary Mark Esper stressed in August that the United States would find a Turkish incursion into northern Syria “unacceptable” and would seek to prevent such an operation.

“We have a lot of mutual interests in northern Syria. We want to sustain the continued defeat — at least of the physical caliphate — of ISIS. That becomes a question if [the Turks] move in and the SDF is impacted,” Esper added.

On Friday, following a phone call with his Turkish counterpart the day before, Esper told reporters he “made very clear to him and he agreed as well that we need to make the security mechanism work.”

Critics of Trump’s decision included several people who are typically his most staunch defenders, including his former U.N. Ambassador Nikki Haley, who tweeted that leaving the Kurds “to die is a big mistake.” She also included the hashtag “#TurkeyIsNotOurFriend.”

Sen. Lindsey Graham (R-S.C.), a close Trump ally who previously talked the president out of a full withdrawal, called the decision a “disaster in the making.” He argued a retreat from northeast Syria “ensures” an ISIS comeback, “forces” the Kurds to align with Syrian President Bashar Assad, “destroys” Turkey’s standing with Congress and “will be a stain on America’s honor for abandoning the Kurds.”

He also pledged to introduce a resolution calling for Trump to reverse his decision and legislation to slap sanctions on Turkey. Graham further vowed to call for Turkey’s removal from NATO if follows through on its Syria offensive.

The SDF are detaining more than 10,000 ISIS fighters in makeshift prisons in northeast Syria, including about 2,000 fighters from countries other than Syria and Iraq. The United States has been trying to convince countries to take their citizens back for prosecution with little success.

Despite Trump promising during his first presidential campaign to “load” the Guantanamo Bay detention facility with “bad dudes” from ISIS, he has more recently blasted the cost of detaining people at Guantanamo as “crazy.”

In justifying his decision to retreat from northeast Syria, Trump railed against European countries for not taking back foreign fighters, saying they “said ‘NO,’ thinking, as usual, that the U.S. is always the ‘sucker,’ on NATO, on Trade, on everything.”

“Turkey, Europe, Syria, Iran, Iraq, Russia and the Kurds will now have to figure the situation out, and what they want to do with the captured ISIS fighters in their ‘neighborhood,’” Trump tweeted.

The White House statement Sunday and the Pentagon’s statement Monday both said Turkey will now be responsible for detaining ISIS fighters.

But critics fear the SDF, which had little capacity to hold the detainees in the first place, will abandon or release them when they have to devote their resources to fighting Turkey and that Ankara won’t step in to hold them.

“Turkey has neither the intent, desire, nor capacity to manage 60k detainees in al Hol camp, which State and [Department of Defense inspectors general] warn is the nucleus for a resurgent ISIS,” tweeted Brett McGurk, who resigned as Trump’s special envoy to the anti-ISIS coalition in December. He was referring to an SDF-run refugee camp in northern Syria holding several thousand ISIS family members. “Believing otherwise is a reckless gamble with our national security,” he added.