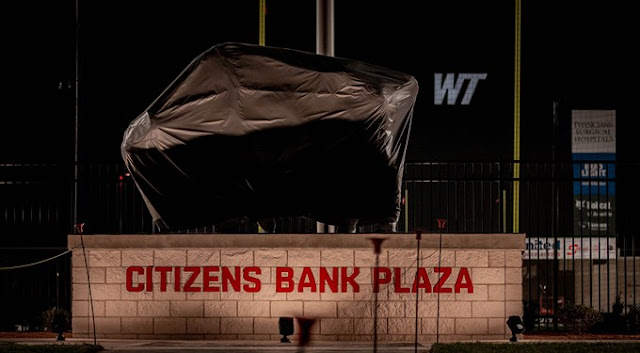 West Texas A&M Athletics announced today that the iconic White Buffalo will be the centerpiece of the new Citizens Bank Plaza, a naming agreement approved by the Texas A&M University System Board of Regents.

"We are very grateful for the people of Citizens Bank taking the lead on this project," said Michael McBroom, Director of Athletics. "This was one of the very first commitments we had for the stadium, and it was important to all of us, especially Citizens Bank, that we pay proper homage to such an iconic symbol of West Texas A&M and the Texas Panhandle. The buffalo's new home is simply stunning and we have preserved this icon for generations to follow."

Citizens Bank Plaza is located just outside the gates of the south end of Buffalo Stadium, along Russell Long Boulevard. The Plaza is home to the White Buffalo, and pays tribute to each of the live mascots who have served the university since 1910. The Plaza also honors members of the fraternity of Lambda Chi Alpha, who provided the original funding for the White Buffalo in 1967, and again in 2019 for restoration.

The White Buffalo was prominently displayed at Kimbrough Memorial Stadium for 51 years, before being removed last February for restoration in advance of moving to its new home at Buffalo Stadium.

"WT is a special place for many people, myself included," said Jeff Nunn, President/CEO of Citizens Bank and All-American Linebacker for the Buffs in 1976. "The White Buffalo on the hill was a symbol of strength, speed and grit for the WT athletes and fans alike. Citizens Bank is proud to be a part of preserving this legacy for those who follow us."

Citizens Bank is a family-owned community bank that has served the region since 1904. Specializing in agriculture lending, Citizens Bank has been recognized as one of the Top 50 safest banks in the United States. They have locations in Amarillo, Claude, Tulia and Tucumcari.

The White Buffalo will be unveiled and Citizens Bank Plaza dedicated in a special ceremony to be held at 11 a.m. on Sept. 6. Following the ceremony, Buffalo Stadium will be open for the first time for the public to view and enjoy a hot dog and participate in on-field activities. The event is free and open to the public. Parking is available in front of and behind the Virgil Henson Activities Center, across from Buffalo Stadium.

WT hosts Azusa Pacific in the inaugural game at Buffalo Stadium on Saturday, Sept. 7. Kickoff is set for 6 p.m.