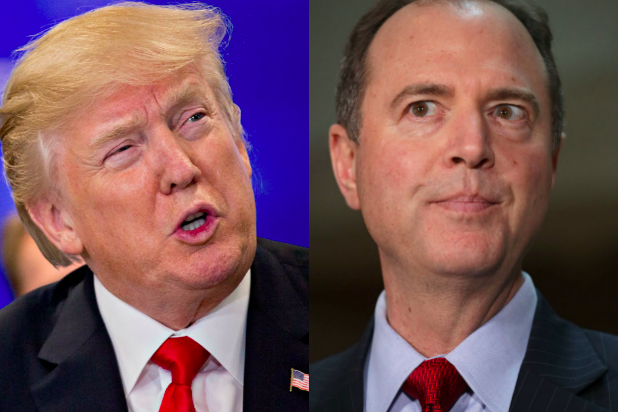 In a series of morning tweets, Trump ripped Schiff and the anonymous whistleblower who raised concerns about Trump's conduct on the call with the president of Ukraine, the latter of which has accelerated a Democratic impeachment inquiry into Trump.

"Rep. Adam Schiff illegally made up a FAKE & terrible statement, pretended it to be mine as the most important part of my call to the Ukrainian President, and read it aloud to Congress and the American people," Trump tweeted. "It bore NO relationship to what I said on the call. Arrest for Treason?"

Schiff oversaw a hearing last week with the acting director of national intelligence to discuss the whistleblower complaint.

In his opening remarks, Schiff recounted Trump's call with Ukrainian President Volodymyr Zelensky by paraphrasing aspects to emphasize allegations of wrongdoing, including saying that Trump directed Zelensky to “make up dirt on my political opponent” a full “seven times.”

Schiff defended his comments during the hearing Thursday amid Republican backlash, arguing they were made partially in jest.

"Of course, the president never said, ‘If you don’t understand me I’m going to say it seven more times,’ my point is, that’s the message that the Ukraine president was receiving in not so many words,” he said.

The president has in recent days targeted Schiff and the whistleblower on Twitter. He has insisted that his call with Zelensky, in which he urged the Ukrainian leader to "look into" Democratic presidential candidate Joe Biden, was "perfect."

Trump on Monday also blasted the "Fake Whistleblower complaint" as a "fraud." He claimed its description of events "is not holding up," though it aligns with the White House's own rough transcript of the call and acting Director of National Intelligence Joseph Maguire called it "credible" and said the individual behind the complaint "did the right thing."

"The Greatest Witch Hunt in the history of our Country!" Trump tweeted Monday.

The president late Sunday said he wanted to meet the individual behind the whistleblower complaint and questioned whether those involved in sharing information about the call were spies, suggesting they deserved a harsh punishment.

The Whistleblower Protection Act makes it a violation for federal agencies to threaten retaliation against individuals who come forward to raise concerns of wrongdoing within the government.