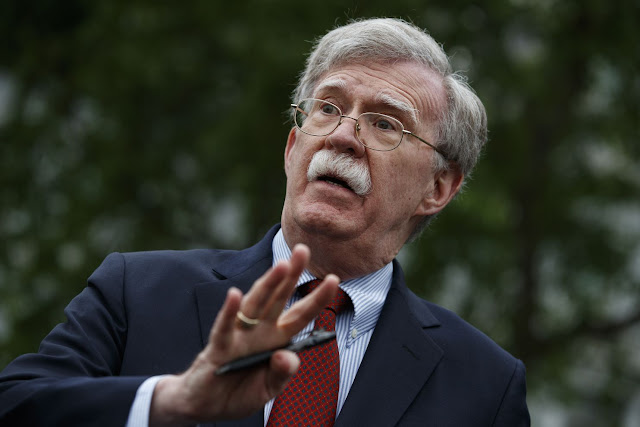 President Trump said Tuesday that he has ousted John Bolton as his national security adviser.

Trump said in a series of tweets that he told Bolton Monday night "that his services are no longer needed at the White House," citing disagreements with many of Bolton's suggestions, though he didn’t provide specific details. Trump said Bolton submitted his resignation on Tuesday and that he would tap a new national security adviser next week.

"I informed John Bolton last night that his services are no longer needed at the White House. I disagreed strongly with many of his suggestions, as did others in the Administration," Trump tweeted.

"I asked John for his resignation, which was given to me this morning. I thank John very much for his service. I will be naming a new National Security Advisor next week," Trump continued.

The news came less than two hours before Bolton was due to appear at a briefing at the White House Tuesday afternoon along with Secretary of State Mike Pompeo and Treasury Secretary Steven Mnuchin.

Bolton’s ouster comes amid controversy surrounding Trump’s scrapped plans to invite the Taliban to Camp David for talks about a potential peace agreement that would allow for U.S. troops to withdraw from Afghanistan.

Bolton was reportedly vehemently opposed to the meeting, which would have occurred days before the 18th anniversary of the Sept. 11, 2001, terror attacks. Trump, however, has denied reports that Bolton and Vice President Mike Pence disagreed with his plan to invite the Taliban to Washington.

Trump announced on Twitter Saturday that he had canceled the meeting after the Taliban claimed responsibility for a suicide attack in Kabul that killed 12 people, including one American service member.