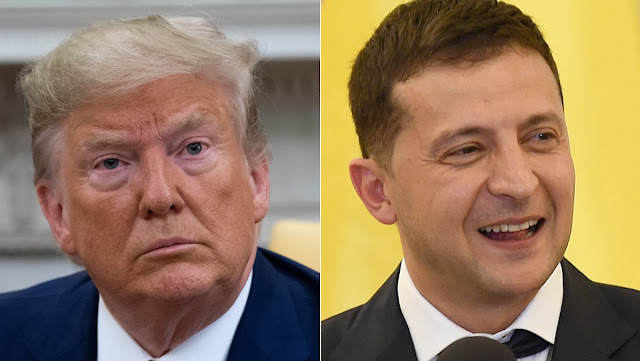 President Trump on Tuesday confirmed that he withheld funds from Ukraine amid growing furor over his interactions with the country, arguing he did so because he wanted European nations to contribute more to the cause.

"I want other countries to put up money. I think it’s unfair that we put up the money. Then people called me and said, 'oh let it go,' and I let it go," Trump told reporters at the United Nations.

Multiple news outlets reported Monday night that Trump ordered millions of dollars in military aid for Ukraine be withheld just days before a July 25 call with Ukrainian President Volodymyr Zelensky. Trump has since acknowledged that he raised Democratic presidential candidate Joe Biden and corruption on the same call, alarming Democrats.

Trump on Tuesday indicated he had no regrets about holding up the funds, which were intended to help Ukraine combat Russian aggression, saying France, Germany and others should put forward more money.

"Those funds were paid. They were fully paid but my complaint has always been – and I’ll withhold again and I’ll continue to withhold until such time as Europe and other nations contribute to Ukraine, because they're not doing it," he said.

The president has denied there was any explicit quid pro quo involving the aid and an investigation into Biden and his son's activities in Ukraine.

Trump is scheduled to meet with Zelensky on Wednesday on the sidelines of the United Nations.

More than a dozen Democrats have come out in favor of impeachment since Monday as information trickles out about Trump's interactions with Ukraine, which were first raised in a whistleblower complaint filed last month.