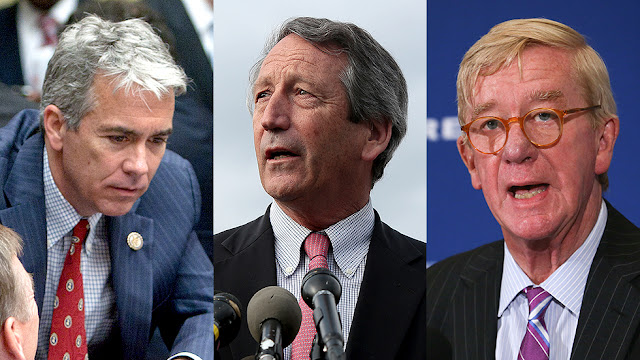 President Trump’s campaign is moving to block three Republicans challenging him in next year’s primary election, cognizant of the potential threat those challengers represent to Trump’s hold on his vaunted Republican base.

The Trump campaign has worked for months to limit a challenger’s ability to test Trump’s hold on his Republican base.

They have installed pro-Trump party officials in key states, sometimes ousting incumbents to do so. Over the weekend, several states voted to end primaries or caucuses that would have given those challengers an opportunity to attract votes. In one state, South Carolina, party officials canceled their primary in apparent violation of their own rules.

Weld is a libertarian. Walsh, now a radio host in Illinois, is a product of the Tea Party. And Sanford is a fiscal conservative who launched his campaign warning of unsustainable debts that will grow because of the Republican tax cuts passed in 2017.

“We have a storm coming that we are neither talking about nor preparing for given that we, as a country, are more financially vulnerable than we have ever been since our Nation’s start and the Civil War,” Sanford wrote on Twitter on Sunday. “We are on a collision course with financial reality. We need to act now.”

They acknowledge that they have little chance of presenting Trump with a serious challenge. Sanford said last month he would run to force a conversation about fiscal conservatism, rather than to win.

GOP lawmakers brush off the Trump challengers from within his party.

That three Republicans are running against Trump “reveals the inability of some establishment Republicans to see what is obvious to the vast majority of grassroots Republicans,” Sen. Kevin Cramer (R-N.D.), a staunch Trump ally, said. “They simply cannot accept that Donald Trump is president because he isn’t them.”

“Trump has a better approval rating than either Bush had among Republicans,” said Rep. Jim Banks (R-Ind.), who backs Trump’s reelection bid. “Challengers are just looking for airtime and relevance. Mark Sanford has a better chance of being found on Appalachian Trail than being found on key state Republican Primary ballots.”

Still, even if they cannot win, the challengers represent a threat to Trump’s reelection hopes in a different way. History is not kind to presidents who face challenges from within their own parties.

Since the beginning of the 20th century, every president who has faced a primary challenge from within his own party has won renomination, but has lost the subsequent general election.

It is unlikely that Weld, Walsh or Sanford will morph into a modern-day Reagan, Kennedy or even Buchanan.

“There is no viable path for any of them to win a primary,” said Saul Anuzis, a former chairman of the Michigan Republican Party who backed Sen. Ted Cruz (R-Texas) in the 2016 primary. “I have never seen the party more united behind a candidate.”

But even the slightest hint of internal dissent has predicted doom for presidents past: At the 1932 Republican convention, about 1 percent of delegates voted for someone other than sitting President Hoover, who governed through the Great Depression.

Hoover lost the presidency, and 42 of 48 states, to Franklin Roosevelt that November.

Hoover did not have Twitter. President Trump does, and he has shown early indications that the internal challenges get on his nerves. On Monday, Trump attacked Sanford over the former South Carolina governor’s romantic affair with an Argentine journalist (Trump did not say anything about his own affairs).

Three times, he has tweeted about candidates he calls the “Three Stooges.”

Some observers think the Trump tweets could backfire.

“They are going to needle Trump from different angles, provoking him to make intemperate and self-injurious responses,” said John Pitney, a political scientist at Claremont McKenna College and a former top spokesman for the Republican National Committee when George H.W. Bush was president. “They can’t do much direct damage to Trump, but they can goad him into damaging himself.”

In spite of the high regard in which Republican voters hold Trump, some say they would be happy to see a contested primary. Forty percent of registered Iowa Republicans told the Des Moines Register’s pollster in March that they hoped Trump would be challenged — even though 63 percent of that group approved of Trump’s job performance. Just 55 percent of New Hampshire Republicans said in May they wanted Trump to run unopposed in the GOP primary.

“Each of these candidacies will garner media attention disproportionate to their actual levels of support among Republicans, the vast majority of whom support the president’s renomination,” said Ron Nehring, a former head of the California Republican Party.