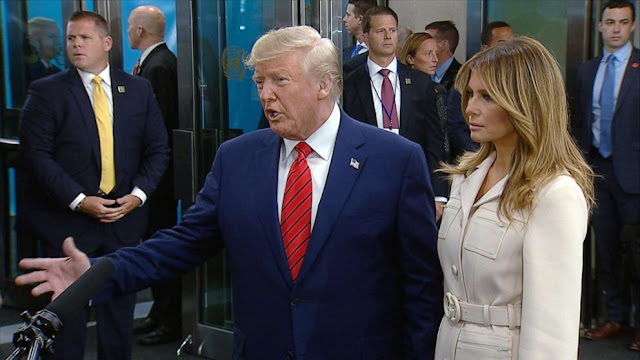 President Trump on Tuesday scoffed at the mounting calls for impeachment proceedings from House Democrats as he faces increasing scrutiny for his interactions with Ukraine.

More than a dozen Democrats have come out in favor of impeachment in recent days as new information emerged that Trump withheld funds for Ukraine and raised the subject of former Vice President Joe Biden, who is running for president, and his son during a call with the Ukrainian president.

"I think it’s ridiculous. It’s a witch hunt. I’m leading in the polls. They have no idea how they stop me, the only way they can try is through impeachment," Trump told reporters as he arrived at the United Nations ahead of his address to world leaders Tuesday morning.

Democrats have raised alarm bells that Trump and his allies have solicited a foreign nation to investigate one of his political opponents after the president acknowledged that he spoke about the Bidens in the context of corruption during a July 25 call with Ukrainian President Volodymyr Zelensky, but he has denied there was anything improper about it.

Additional Democrats have come out in favor of impeachment following reports Monday night that Trump ordered millions of dollars in military aid for Ukraine be withheld just days before the call with Zelensky.

The president denied there was any explicit quid pro quo involving the aid and the investigation into the Bidens.

Trump on Tuesday claimed that he withheld the funds because he wanted to see European nations like France and Germany contribute more to help Ukraine fend off Russian aggression, and he did not express any regret about his decision.

"Those funds were paid. They were fully paid but my complaint has always been — and I’ll withhold again and I’ll continue to withhold until such time as Europe and other nations contribute to Ukraine. Because they're not doing it," he said.

Trump is scheduled to meet with Zelensky on Wednesday on the sidelines of the United Nations General Assembly.