Transparency can be downright hazardous to Texas lawmakers 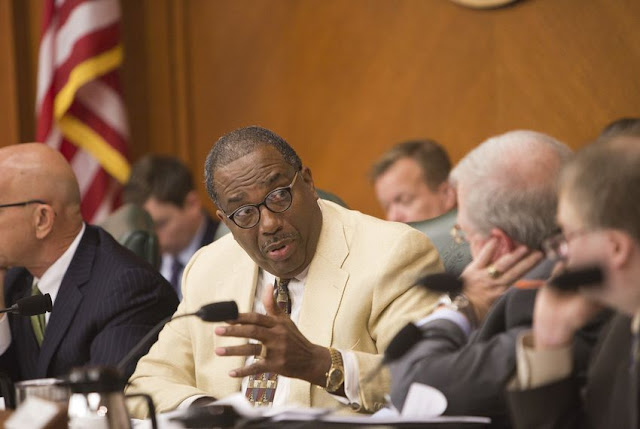 Texas Sen. Royce West, as it turns out, does a lot of government business. Not that you’d know that from reading the disclosures he’s required to make as a state lawmaker.

The Texas Tribune’s Jay Root ferreted that information out of West’s federal filings — required because the Dallas Democrat wants to be a U.S. senator, and federal disclosure laws are more serious than the window-dressing ethics requirements here at home.

Those federal disclosures tell you a lot about West — that he has made millions of dollars in legal fees representing governmental entities and that he jointly manages a tax consulting firm with a company owned by a top Republican donor, for instance.

But it also points out the timorous condition of the state’s disclosure laws. That condition isn’t new; in fact, a recent tweak to those weak requirements revealed some detail about West’s government contracts.

And the holes haven’t really been hidden, either. Former Gov. Rick Perry showed us some of the holes in state reporting laws when he was running for president in 2011 and had to meet more stringent standards of disclosure. Here’s one you might remember: He had been double-dipping by collecting his state pension and his state salary at the same time. It was legal, but it was also a political embarrassment.

David Dewhurst showed us when he ran for U.S. Senate against Ted Cruz around the same time. State filings indicated he was worth more — possibly a lot more — than $30 million or $40 million. But the detailed federal filings put his net worth in the $200 million range, rich as a Romney. Had he won that election, he’d have been one of the richest members of a Congress that already has some very rich people.

State officials or candidates can hide conflicts of interest and secret assets and income much easier than people seeking or holding federal office can. West is just the newest member of that club.

The disclosures could matter, too, providing leads for the eight opponents who are also seeking the Democratic nomination to run against U.S. Sen. John Cornyn next year. If West is the nominee, it’ll be Cornyn’s turn.

And if West falls short, either in the primaries or the general election, he’ll still be in the Texas Senate, debating bills and doing government work with colleagues who now know a lot more about his business, his income and net worth than they knew before he stuck his foot into a federal race and subjected himself to those detailed disclosure laws.

Doesn’t it make you wonder about everybody else in Texas government?

Even though most details about members' financial condition and interests are uninteresting, they can be illuminating. And in cases like West's, those details could be the most educational.

Just dream of it:

Who has potential or real conflicts of interest, voting on legislation that could enhance their incomes and investments, or new state laws that might limit the strength of business competitors?

Who’s in financial trouble, subject to overtures from interests and people who happen to need something from the government?

Who has reaped an actual fortune by holding what looks like a loser job, a $600-per-month-plus-expenses gig in the Texas Legislature?

And here’s the big question all those other questions help answer: Why do the people in government vote the way they vote, side with the folks they side with, file the bills they file (and avoid the ones they don’t); why do they act the way they act?

You have a better chance of answering questions like those if you’re watching the federal government; in Texas, the disclosure laws are better than nothing and, at the same time, pretty weak tea.

A better chance, that is, unless you’re watching someone like Royce West, who ran for a federal job and, as a consequence, had to show more of his financial cards.

It puts him at an unfair disadvantage in Austin, though: His Texas colleagues in the elected class don’t have to do the same thing.