The Stache was never a good fit to work with Trump 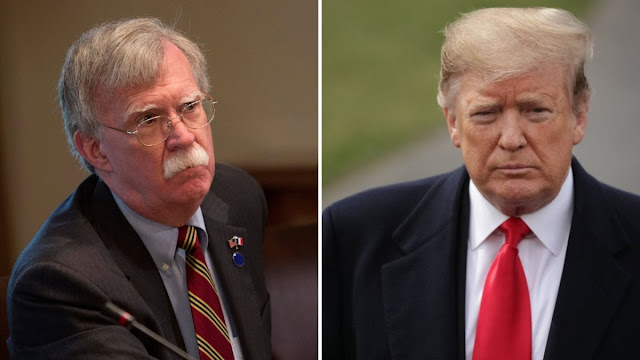 Obviously, John Bolton was never an easy fit in the Trump White House. His worldview and experience are one thing; Trump’s are another. The contrast was most vivid, I think, in the last week of August.

Trump was at the G-7 meeting in France. He kept calling for the readmission of Russia to the group. Russia was kicked out in 2014, because Putin had started a war in Ukraine and annexed Crimea. He has done nothing to earn readmission.

Talking to the press, Trump said some weird things about Crimea. The peninsula, he said,

Currently, Trump is withholding military aid to Ukraine and denying the country’s new president, Volodymyr Zelensky, a White House visit. Apparently, this is because Trump is trying to force the Ukrainian government to intervene in U.S. presidential politics by launching an investigation of Joe Biden. Really. The Washington Post editorialized on this matter, here.

While Trump was in France, calling for the readmission of Russia to a group of democracies, John Bolton was in Kiev, laying a wreath at a memorial. He tweeted, “It was an honor to represent the American people in paying our solemn respects to Ukrainians who have died in the defense of their nation against Russian aggression.”

From 2016 onward, we have seen remarkable transformations: Free-marketeers make excuses for protectionism; hawks and anti-Communists make excuses for nauseating love-fests with Kim Jong-un. Bolton, by contrast, has remained steady. As far as I can tell, his views on Kim, Putin, the Taliban, Iran, and other matters remain the same. Bolton is still Bolton. He has not shape-shifted or been body-snatched.

According to reports, Bolton was unwilling to go on television to defend the president in certain respects. He left that to others. There are always people willing to do the president’s bidding, whatever that bidding is. You remember Trump’s first press secretary, on Day One: Trump had enjoyed “the largest audience to ever witness an inauguration, period.” (Actually, no.)

It goes without saying that the president, whoever he is, gets his way. He is the one the voters elected. No one elected a staffer, and no one elected a cabinet member, either. But if I were president — there’s a thought! — I hope I would want solid, strong-willed advisers around me, willing to disagree. A court of sycophants is not very helpful.

If I am ever elected — don’t hold your breath, or, alternatively, don’t worry — please hold me to this.

Anyway, Bolton is out of the White House, although I hope he will be back in government someday, somehow, and, as I’ve had many occasions to say over the years, I salute the Stache.