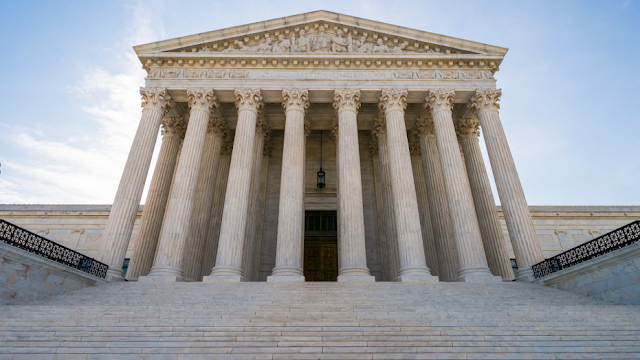 The Supreme Court on Wednesday approved President Trump's request to allow the administration to enforce its new asylum rule even as it is challenged in the courts.

The decision was issued in an order. Justices Sonia Sotomayor and Ruth Bader Ginsburg, two of the court's four liberal justices, dissented.

The order is a victory for Trump, who has vowed to take action to stem the tide of immigrants at the southern border, most of whom are coming from Honduras, Guatemala and El Salvador.

The new asylum rules are expected to severely cut down on the number of immigrants from Central America who can request asylum in the United States, essentially preventing many of those coming from that region to do so.

They would make people seeking asylum who pass through another country before the United States ineligible unless they first seek asylum in the country through which they are traveling.

"Once again the Executive Branch has issued a rule that seeks to upend longstanding practices regarding refugees who seek shelter from persecution," Sotomayor wrote in the dissenting argument.

Sotomayor added that she believed the government didn't take the necessary steps when attempting to implement the rule, saying it didn't allow for public input. She also criticized the administration for asking the Supreme Court to intervene in the decisions of lower courts.

"This is an extraordinary request," she wrote. "Unfortunately, the Court acquiesces. Because I do not believe the Government has met its weighty burden for such relief, I would deny the stay."

Trump, meanwhile, immediately celebrated the court’s decision on Twitter, calling it a “WIN for the Border on Asylum!”

"This greatly helps build on the progress we’ve made addressing the crisis at our southern border and will ultimately make American communities safer," he added.

The rule in question was unveiled by the Departments of Justice and Homeland Security in mid-July. It states that those seeking asylum at the southern border with Mexico who pass through another country will not be eligible for asylum unless they first seek it in the country they pass through.

The rule does grant some exceptions, including for victims of trafficking and those who are denied asylum in other countries, but is expected to considerably reduce the number of asylum claims.

The California-based 9th Circuit Court of Appeals upheld Tigar’s decision in August but limited their decision to apply to only the border states in their jurisdiction: California and Arizona.

The White House then turned to the Supreme Court to get approval for the rule. The government argued in an August filing that the rule "alleviates a crushing burden on the U.S. asylum system by prioritizing asylum seekers who most need asylum in the United States."

Tigar re-established a nationwide ban on the asylum rule Monday, prompting the administration to ask the court to lift the order stopping it from implementing the rule again Tuesday.

The Supreme Court had previously rejected a request from the administration in December to restrict those crossing the border illegally from applying for asylum after the 9th Circuit Court of Appeals denied an administration request to delay a judge’s block on the policy.

The Supreme Court's Wednesday ruling only affects the lower court injunctions that prevented the administration's asylum rule from being implemented. The rule itself is still the subject of litigation and could be struck down by courts.

In the meantime, the administration will be allowed to implement its rule, denying many asylum applicants the right to request protections in the United States.

American Civil Liberties Union lawyer Lee Gelernt wrote the administration's change in asylum rules is "tectonic," and "would eliminate virtually all asylum at the southern border, even at ports of entry, for everyone except Mexicans."

The administration's rule, if permanently imposed, would vacate the need for safe third country agreements with Mexico and Central American countries.

Safe third country agreements force prospective asylees to seek protections in the first country they step foot in outside the territory they are fleeing.

The Trump administration has sought such agreements with Mexico and the Northern Triangle countries — Honduras, Guatemala and El Salvador — but has so far been unsuccessful in getting those countries to process all refugees from third countries transiting their territories.

The United States currently maintains such an agreement only with Canada, and that agreement mostly serves as a border management deal to keep asylum applicants from processing their claims at the physical border between the two North American countries.