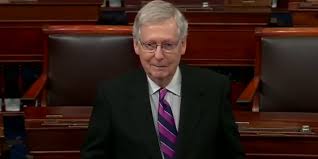 Senate Republicans are vowing to quickly quash any articles of impeachment that pass the House and warn that Democrats will feel a political backlash if they go forward and impeach President Trump.

Republican senators say there are no grounds to impeach Trump and are daring Speaker Nancy Pelosi (D-Calif.) to embark on what they dismiss as a fool’s errand that will turn off swing voters.

“My response to them is go hard or go home,” said Sen. John Kennedy (R-La.), a member of the Senate Judiciary Committee, which has jurisdiction over impeachment.  “If you want to impeach him, stop talking. Do it. Do it. Go to Amazon, buy a spine and do it. And let’s get after it.”

“I think the public will feel like it’s more harassment,” he predicted.

Republicans say that impeachment will boomerang on Pelosi and Senate Minority Leader Charles Schumer (D-N.Y.), who have tried to resist pressure from the left to impeach Trump for more than a year.

“It’s a risky strategy on their part. I know they’re under a lot of pressure to do it, but if you’re the leadership over there, you got to think long and hard about what the implications are if it looks like you’re overreaching,” he said.

Senate Republicans on Tuesday argued there is no basis for impeachment, especially after Trump pledged to release an unredacted transcript of his phone call with Ukrainian President Volodymyr Zelensky.

Sen. Chuck Grassley (R-Iowa), a senior member of the Judiciary Committee, said, “You can’t tell me they’re talking about impeachment when the president is cooperating with them 100 percent to release these things.”

“It’s premature to talk about impeachment,” he said.

“I think the Democrats have made this such a partisan exercise that I think most of the public has discounted the idea of it, because I think most believe that it’s become sort of a political attack on the president and nothing more,” he said.

Paul, however, said it’s hard to predict exactly how events will unfold in the Senate because so little is known about the latest allegations.

Trump has acknowledged that military aid was withheld from Ukraine and that he discussed former Vice President Joe Biden with Zelensky during a discussion on corruption. He has said there was no quid pro quo between the two issues and that there was nothing improper in his communications.

Senate experts say that Senate Majority Leader Mitch McConnell (R-Ky.) is required to act on House-passed articles of impeachment, which would require 67 votes, or a two-thirds majority, to convict the president.

But McConnell has broad power to set the rules and could ensure the trial on the Senate floor is as brief as possible. He could strictly limit the arguments of House Democratic prosecutors as long as he’s backed up by his fellow GOP senators.

Supreme Court Chief Justice John Roberts would likely preside over a Senate trial, but he would have to follow the rules and traditions of the Senate, where the majority leader sets the schedule and has the right of first recognition.

Under the Senate manual’s rules for impeachment trials, Roberts would rule on all questions of evidence, but any senator could ask for a formal vote to appeal a decision.

It would take a majority under Senate rules to sustain or overrule a ruling from the chair.

That means Democrats would need to convince at least four Republicans to break with the GOP conference in order to bring in any witnesses or exhibits that McConnell decides to block.

McConnell on Tuesday declined to say what he would do, telling reporters only that it’s up to the Senate Intelligence Committee to review the complaint that an unnamed whistleblower filed with intelligence community Inspector General Michael Atkinson.

Atkinson and acting Director of National Intelligence Joseph Maguire are scheduled to appear before the Senate Intelligence Committee in closed session on Thursday.

Senate Judiciary Committee Chairman Lindsey Graham (R-S.C.) on Tuesday said articles of impeachment based on the report by former special counsel Robert Mueller would be disposed of quickly in the Senate, reiterating comments he made in May, a month after the report’s release.

“Yeah, if it’s based on the Mueller inquiry,” Graham said when asked if he still believes the Senate will quickly quash articles of impeachment.

Graham said it’s harder to say how the Senate would handle articles of impeachment based on a whistleblower complaint because little is known about its contents.

“Who knows what’s in it,” he said of the Ukraine-related complaint. “I haven’t heard anything. I’m not going to speculate on stuff like that.”

Polls conducted since the start of 2017, when Trump took office, have shown voters consistently oppose impeachment.

An NBC News–Wall Street Journal poll conducted in July showed that 50 percent of registered voters nationwide oppose the launch of impeachment hearings, while only 21 percent said they supported the start of hearings.

In March, the percentage of voters who opposed impeachment hearings stood at 47 percent, according NBC News–Wall Street Journal polling.

An ABC News–Washington Post poll conducted at the end of June and beginning of July found that 59 percent of adults nationwide opposed the start of impeachment proceedings. That number was up from 54 percent in March.

Sen. John Cornyn (R-Texas), another member of the Judiciary Committee, said there haven’t been any discussions among Senate Republicans about how to handle an impeachment process because GOP lawmakers assumed that Pelosi wouldn’t embark on a path that registers so much disapproval from voters.

Cornyn said there haven’t been any preparations for impeachment.

“You prepare for the probable, not the improbable,” he said.

Some moderate Democrats are also skeptical about moving ahead with such a divisive process.

Sen. Jon Tester (D-Mont.) said articles of impeachment aren’t going anywhere in the Senate and said the smarter strategy is to push Republicans to conduct oversight of the Trump administration, such as by pressing them to ask for the intelligence community inspector general’s report on the whistleblower complaint.

“The last time I checked, this body is controlled by Republicans. I'd rather get government to work functionally and hold people accountable. I'd rather get the Republicans over here to hold Donald Trump accountable on all sorts of stuff, from building a wall to how he treats our allies.”