President Trump doubles down on comments about Dorian hitting Alabama 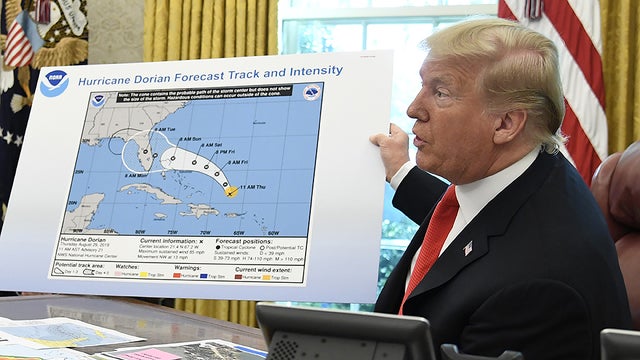 President Trump on Thursday doubled down on his claim that Alabama was in Hurricane Dorian’s original path, a day after displaying an apparently altered map of the storm’s trajectory in the Oval Office.

Trump insisted in a series of tweets Thursday morning that “certain models strongly suggested” Alabama and Georgia would be hit by the hurricane and that one model of the hurricane’s possible trajectory showed Alabama being “hit or grazed.”

“In the early days of the hurricane, when it was predicted that Dorian would go through Miami or West Palm Beach, even before it reached the Bahamas, certain models strongly suggested that Alabama & Georgia would be hit as it made its way through Florida & to the Gulf,” Trump tweeted.

“Instead it turned North and went up the coast, where it continues now. In the one model through Florida, the Great State of Alabama would have been hit or grazed. In the path it took, no. Read my FULL FEMA statement. What I said was accurate! All Fake News in order to demean!” the president wrote.

The tweets came after Trump displayed a map in the Oval Office during a briefing on the storm a day earlier.

The chart appeared to be doctored with a black marking to extend the storm’s potential path into Alabama. A video of the map released by the White House quickly caught attention on social media, where reporters and others noted the National Hurricane Center’s projections didn’t feature a similar possible trajectory.

The developments raised questions about whether it was done to back up Trump’s claim over the weekend that Alabama would be impacted by the storm. Those remarks Sunday prompted confusion, resulting in the National Weather Service in Birmingham tweeting that Alabama would “NOT” experience any impacts from Dorian because the system would remain too far east.

Trump has continued to fixate on the issue over the past four days. During an event on opioids later Wednesday, Trump said he didn’t know anything about the altered map and claimed Alabama was originally forecasted to be in Dorian’s path.

“They actually gave that a 95 percent chance probability. It turned out that that was not what happened; it made the right turn up the coast.  But Alabama was hit very hard, and was going to be hit very hard, along with Georgia,” Trump told reporters, without further explaining where he got the 95 percent figure.

As the media scrutinized the apparently altered forecast map on Wednesday, Trump tweeted out a week-old image from the South Florida Water Management District showing forecast models for Dorian and claimed it showed “almost all models” predicated Dorian would hit Alabama and Georgia.

But the map includes a disclaimer from the National Hurricane Center (NHC) at the bottom noting that NHC advisories and County Emergency Management statements “supersede” the graphic and that if it causes confusion it should be “ignored.”

Trump and other officials said Wednesday that the administration is prepared to offer emergency response and is sending aid to the Bahamas, which was ravaged by the storm, at the request of the government there.