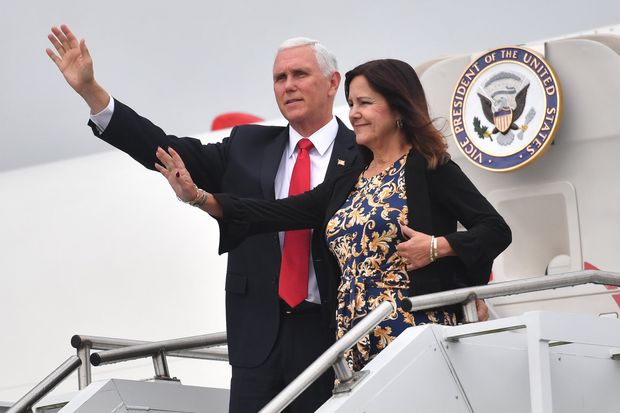 Vice President Pence's office issued a statement late Tuesday saying President Trump did not direct Pence to stay at his resort in Doonbeg, Ireland, a shift from remarks offered by the vice president's top aide.

"Because of some misreporting, we want to clarify that the decision to stay at Trump National in Doonbeg, Ireland was solely a decision by the Office of the Vice President and was based on the requirement to find accommodations near the Vice President’s ancestral hometown that could satisfy official meetings on both coasts of the Emerald Isle," the office said in a statement.

"At no time did the President direct our office to stay at his Doonbeg resort and any reporting to the contrary is false," the vice president's office said.

Earlier on Tuesday, Pence chief of staff Marc Short told reporters that Trump had suggested the vice president stay at his property if he was going to be traveling to the area.

The statement released later on Tuesday sought to distance Trump from the entire issue.

Pence's office said it had originally considered staying one night in Doonbeg due to its proximity to the home of Pence's great grandmother before she emigrated to the United States. The office decided to book two nights there after Trump asked Pence to go to Poland in his place as Hurricane Dorian approached the U.S.

Doonbeg is on the opposite side of Ireland from Dublin, the city where Pence met with Ireland's president. As a result, Pence's hotel stay has raised some questions about why he didn't stay in Dublin.

Democrats and ethics officials raised concerns that the stay further contributed to the appearance that Trump was seeking to profit off the presidency.

Short told reporters aboard Air Force Two on Tuesday morning that Trump had not requested or commanded that Pence stay at his property, but that he suggested it.

Pence himself later defended the move, telling reporters that it was important to him to visit the town because of his family roots.

"I understand political attacks by Democrats, but if you have a chance to get to Doonbeg, you’ll find it’s a fairly small place, and the opportunity to stay at Trump National in Doonbeg, to accommodate the unique footprint that comes with our security detail and other personnel, made it logical," he said.