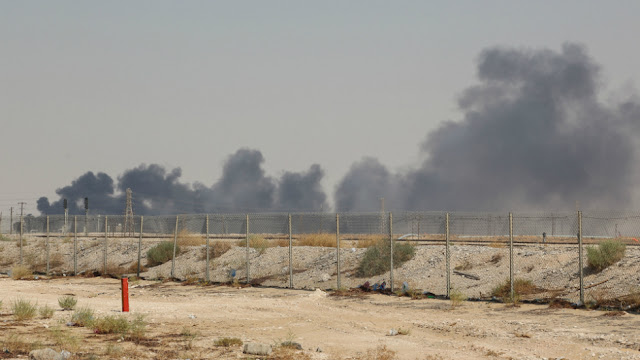 Bloomberg reports the increase in Brent crude, which jumped as much as 19.5% on Sunday, was the most on record after the drone strikes impacted about 5 percent of global oil supplies due to state producer Saudi Aramco losing roughly 5.7 million barrels of output per day.

The jump in prices is the largest in dollar-terms since futures began trading in 1988, according to the news outlet.

The attack was claimed by Houthi rebels in Yemen, who launched two drone strikes against two oil refineries in Saudi Arabia. One of the refineries is the largest crude-processing facility in the world.

Secretary of State Mike Pompeo accused Iran of being behind the attacks. Tehran has denied the allegations.

Bloomberg reports the attacks mark the single worst sudden disruption ever, eclipsing the loss of Kuwaiti and Iraqi petroleum supply in 1990.

The news outlet added that Saudi Arabia will likely be able to restart a bulk of the oil production in the coming days but will need weeks to get back to full output capacity.

President Trump Sunday announced that he had authorized the use of the United State’s emergency oil reserve in response to the attacks.

"Based on the attack on Saudi Arabia, which may have an impact on oil prices, I have authorized the release of oil from the Strategic Petroleum Reserve, if needed, in a to-be-determined amount sufficient to keep the markets well-supplied," Trump tweeted Sunday. "I have also informed all appropriate agencies to expedite approvals of the oil pipelines currently in the permitting process in Texas and various other States."

Trump in a follow-up tweet said the U.S. is “locked and loaded depending on verification” to respond to the attacks but is waiting to hear from Saudi Arabia to determine who they believe is responsible for the attack.