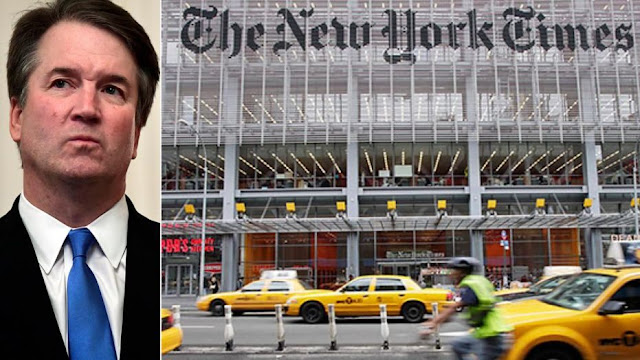 The correction notes that friends of the woman allegedly involved in the incident with Kavanaugh during college say she does not recall it.

The Times in the story published Saturday reported a former classmate of Kavanaugh's named Max Stier said he witnessed the now-justice expose himself and force a female classmate to touch his penis at a dorm party. The Times said it corroborated the story with two other officials who had heard the same report from Stier.

However, the woman involved in the alleged incident did not speak to the Times and, according to the correction, her friends say she does not recall that it happened.

President Trump, who nominated Kavanaugh to the Supreme Court, defended him, tweeting, "Brett Kavanaugh should start suing people for libel."

Trump also noted the story correction on Monday morning, tweeting: "DO YOU BELIEVE WHAT THESE HORRIBLE PEOPLE WILL DO OR SAY. They are looking to destroy, and influence his opinions — but played the game badly. They should be sued!"

Another woman, Deborah Ramirez, last year accused Kavanaugh of exposing himself and forcing her to touch him during their freshman year at Yale during the 1983-84 school year. A third woman, Julie Swetnick, accused Kavanaugh of being part of a group that planned gang rapes of young women at house parties while in high school. Kavanaugh has denied all the allegations.

The new allegation regarding an unnamed woman stems from an upcoming book titled "The Education of Brett Kavanaugh: An Investigation" by New York Times reporters Robin Pogrebin and Kate Kelly.