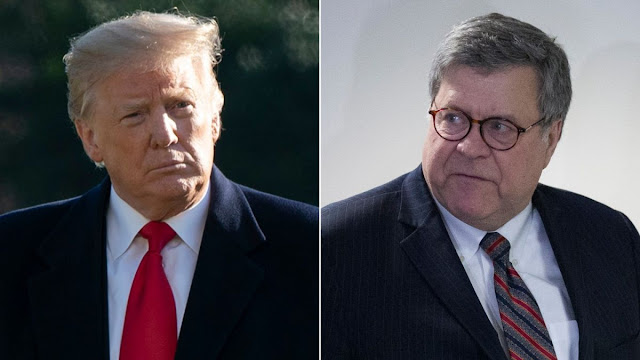 The Department of Justice said Monday that President Trump contacted foreign countries at Attorney General William Barr’s request to ask them for assistance in an ongoing investigation into the origins of the Russian interference probe.

“As the Department of Justice has previously announced, a team led by U.S. Attorney John Durham is investigating the origins of the U.S. counterintelligence probe of the Trump 2016 presidential campaign. Mr. Durham is gathering information from numerous sources, including a number of foreign countries,” Justice Department spokeswoman Kerri Kupec said in a statement.

The Justice Department statement quickly followed reports that Trump had asked Australia’s prime minister during a recent phone call to assist Barr in gathering information for the Russia inquiry, and that Barr had held meetings overseas seeking the country's help.

Democrats have accused Trump and Barr of pursuing a politically motivated investigation. Trump railed against former special counsel Robert Mueller’s investigation as a “witch hunt” and has at times claimed the investigation into his campaign’s links to Russia was “illegal.”

White House spokesman Hogan Gidley said Monday that Barr asked Trump to “provide introductions to facilitate” the ongoing investigation, accusing Democrats of not wanting “the truth to come out.”

"This call relates to a DOJ inquiry publicly announced months ago to uncover exactly what happened," Gidley said in a statement Monday. “The DOJ simply requested that the President provide introductions to facilitate that ongoing inquiry, and he did so, that's all."

Barr said earlier this year that he planned to investigate the intelligence collection on the Trump campaign to determine whether it was “adequately predicated.” Trump has given Barr sweeping powers in the investigation, including allowing the attorney general to declassify and release documents related to the probe.

The review spearheaded by Durham, the U.S. attorney in Connecticut, is separate from the Justice Department inspector general’s investigation into the FBI’s surveillance of ex-Trump campaign adviser Carter Page, a report on which is currently being prepared.

Mueller concluded his investigation in March; the former special counsel did not find sufficient evidence to accuse members or associates of Trump’s campaign with conspiring with Russia to interfere in the 2016 election.

The investigation ensnared six Trump associates on financial, false statements and other charges.