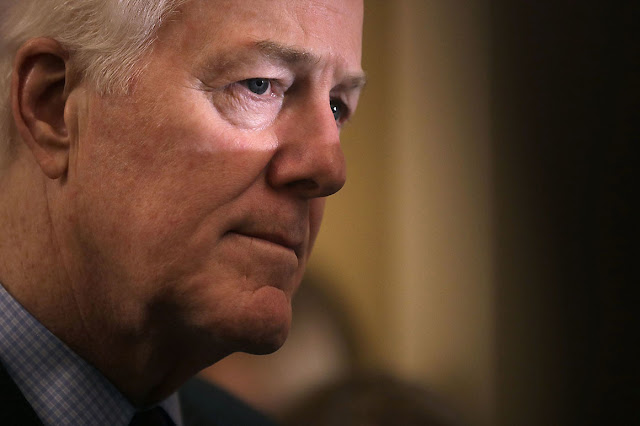 Texas Sen. John Cornyn (R) is facing the toughest election fight of his political career as he seeks a fourth term in a once deep-red state that Democrats view as a competitive battleground.

Bolstered by record fundraising, the Texas Democratic Party is going all out to win the party’s first statewide election in 25 years, launching a multi-million dollar war room to deliver data and messaging to define Cornyn as beholden to President Trump.

The Democrats have high hopes for their deep field of potential challengers, led at the moment by Mary Jennings Hegar, the 43-year-old motorcycle-riding mother and Air Force veteran with a penchant for viral ads.

When Cornyn won reelection during the 2014 midterms, he did so with 2.8 million votes. He’ll have to blow past that this year after former Rep. Beto O’Rourke turned out more than 4 million Texas Democrats in the 2018 midterms.

Cornyn will have to chip away at the broader political forces that are reshaping Texas, as well as President Trump’s relative weakness here during a presidential election year. Trump’s 9-point margin of victory in Texas in 2016 was the worst showing for a GOP presidential candidate in 20 years.

Still, Texas Republicans are cautiously optimistic about Cornyn’s prospects, describing him as a far less polarizing figure than Sen. Ted Cruz (R-Texas), who was nearly toppled by O’Rourke in 2018.

“He’s a much stronger candidate than Cruz and in any other year, he’d be untouchable, he’d have it in walk,” said Bill Miller, a GOP lobbyist and consultant in Austin. “This year, because of Trump, it’s a different dynamic. The Democrats will have a bloody primary and that’s not the best way to take on an incumbent, but they’re hoping for magic at the top of the ticket. Cornyn is strong, but he’s vulnerable.”

Cornyn begins from a position of financial strength, with more than $10.3 million in the bank. Hegar, the top fundraiser so far on the Democratic side, had just over $1 million at the end of June.

But polls show that despite his decades-long political career in Texas – he was state attorney general before being elected to the U.S. Senate in 2002 – he is a relatively unknown commodity.

A Dallas Morning News-Emerson college survey from last month found Cornyn’s job approval at 37 percent positive and 31 percent negative, with one-third of Texans saying they were neutral or had no opinion about him.

That’s left an opening for Texas Democrats, who say the primary goal for the war room is to define Cornyn for the flood of new voters who have moved into the state.

“Two-thirds of Texans either don’t know or don’t like John Cornyn,” said Manny Garcia, the executive director of the Texas Democratic Party. “He’s been in office forever, but from 2014 to 2018 there have been 1.8 million new Texans added to the voter roles, most of them women and people of color coming here from Democratic states. They don’t know John Cornyn. We’ll make sure that they find out about him.”

Democrats have high hopes for their own potential challengers as well.

Hegar, who nearly unseated Rep. John Carter (R-Texas) in a deep red district in 2016, has the largest national profile, but Democrats believe several of the contenders could catch fire and nationalize the race, potentially drawing media attention and tens of millions of dollars into Texas, as O'Rourke did in 2018, paving the way for his 2020 presidential run.

Democrats say crowded primaries have become the norm in Texas, as candidates see new opportunities to run for offices that once seemed firmly Republican.

“Every electoral opportunity is within our grasp,” said Garcia.

A source close the Cornyn campaign said that the senator is getting an early start to ensure that he’s not caught flat-footed.

Abbot won reelection by 13 points in 2018, even as Cruz eked out a 2.5 point victory. The campaign is also being advised by former Texas Republican Party chairman Steve Munisteri, a top White House official.

“The 2018 election was a wakeup call for Republicans,” said the source close to the Cornyn campaign. “Everyone saw the outcome and knows that we can’t take elections for granted like we have for the past 10 years.”

Cornyn won Latino and Asian American voters in Texas in 2014 by going up early with ads in Spanish, Vietnamese and Hindi. The campaign hopes to replicate that success in 2020.

And Cornyn is looking to shore up GOP support in the suburbs, holding events over the August break in around Houston and San Antonio, as well as swing counties such as Collin, Tarrant and Williamson.

Cornyn’s reelection strategy will center on the Texas’s economic success, and selling the idea to newcomers that the economic engine here was built by conservative Republican policies.

“Texans will have a clear choice between his bipartisan record and whichever Elizabeth Warren clone limps out of the runoff,” he added, referring to the Massachusetts senator running for president in 2020.

Republicans say Cornyn will also be lifted by the leftward shift of the Democratic presidential contenders, especially if proposals such as "Medicare for All" and the Green New Deal are embraced at the top of the ticket.

Some Texas Republicans believe O’Rourke caught lightning in a bottle in 2018 and that his statewide success will be difficult for the eventual Democratic nominee to replicate.

“The Beto factor was real, and he won a lot of suburban votes and women that we could count on in the past,”said Brendan Steinhauser, the campaign manager for Cornyn’s 2014 Senate run. “But John Cornyn will appeal to the moderates and swing voters that went for Beto in 2018, he has a real opportunity to win them back.”

Still, GOP support among women and suburban voters has slipped, as Texas has attracted scores of new voters from more liberal parts of the country.

That’s a huge problem for Republicans in Texas, which counts four of the largest and fastest-growing metro areas in country. Together, Austin, Houston, San Antonio and Dallas account for more than two-thirds of the voting population here.

“It’s a question of when, not if, if we start winning statewide again,” said one Democrat who works on Senate campaigns. “Texas is a time bomb for Republicans and the fact that they’ll have to allocate resources to the race at all is good for us.”