For Texas Republicans, one election is no longer enough 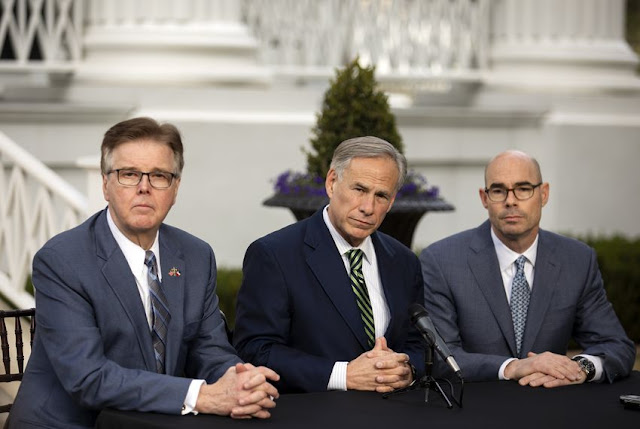 Here’s a new conundrum for Republican politicians at the top of the ballot in Texas: November.

The state’s politics have been so red for so long that an entire generation of Republican politicians and officeholders — the vast majority of the current crop — has never had to fight for non-Republican votes after the primaries. It’s a conventional two-step: Run to your party in the primaries, where voters pick the nominees, and then run back toward the middle in the general election, when votes from independents and — maybe — some of the other party’s supporters come into play.

You can still be a 100% Republican in Texas and win; examples abound, from the governor and lieutenant governor to the Texas Railroad Commission. But ignoring the Democrats and independents was easier when the average Republican running statewide was pulling in 55.8% of the votes, as happened in the 2012 presidential cycle, or 59.4% in 2014, a gubernatorial election year. Those average Republican numbers have slipped, to 54.3% in 2016, another presidential election year, and to 52.8% in 2018, the off-year election that turned the heads of Republicans and Democrats alike.

The sometimes subtle rebalancing was evident right after the 2018 election, when the state’s top three leaders — Gov. Greg Abbott, Lt. Gov. Dan Patrick and House Speaker Dennis Bonnen — held a news conference to say they would be all about the bread-and-butter issues of school finance and property taxes during the 2019 legislative session. What they weren’t going to be about, for instance, was the “bathroom bill” debate — a gnarly, time-wasting battle in the culture wars — that excited some of the partisans on both sides in the 2017 legislative session while taking oxygen from important but less political fights. By the end of the 2019 session, the state’s top brass took their victory laps for a session that didn’t sink into political fights.

They even bragged about the bipartisan nature of their results.

That 2018 election result is also on the minds of Texans who’ll be seeking office in 2020. Maybe it’s on the minds of some who aren’t, too: Five Republicans in the state’s congressional delegation won’t seek reelection next year, and a few of them — Will Hurd of Helotes, Kenny Marchant of Coppell and Pete Olson of Sugar Land — are leaving seats either party’s candidates could win in 2020.

For Hurd, that’s not new; the 23rd Congressional District in Texas was drawn to be competitive, and it shows in his politics and the politics of the Democrats and Republicans who held the seat before him. He won by less than half a percentage point last year. The Democrats were more conservative than their colleagues in Congress. They had to be, to survive in a district with lots of Republican voters. Likewise, Hurd has been more liberal than his Republican colleagues in Congress, because of the Democrats at home.

Not every Texas Republican leaving Congress is avoiding a competitive situation at home. Mike Conaway of Midland is leaving a district that does almost the same thing in general elections that it does in the Republican primaries in March: He won reelection in 2018 with 80% of the vote against two opponents, while Republicans were facing headwinds at the top of the ticket. And Bill Flores of Bryan beat his Democratic opponent by more than 15 percentage points.

U.S. Sen. Ted Cruz, Patrick, Attorney General Ken Paxton and others on the statewide ballot would have loved to have margins like those in 2018. They won their races, but also got a clear message: November elections in Texas are no longer cakewalks.

The statewide officeholders elected last year won’t be on the 2020 ballot. They remain markedly conservative. But they’re also talking about some issues in ways that a time-traveler from the hyper-Republican Texas of 2010 might not expect. And it makes sense, at a time when national Democrats are working to flip a half-dozen Republican congressional seats here, and state Democrats are trying to flip nine state House seats, which would give them a majority there. Abbott and Patrick are talking about new gun sales regulations in the wake of mass shootings in El Paso and Odessa that wouldn’t have turned their heads — in fact, that didn’t turn their heads — in the wake of earlier mass shootings in Sutherland Springs and Santa Fe.

The Second Amendment has long been sacrosanct with Republican voters, and the people who represent them. But those primary voters aren’t the only important audience in Texas anymore.