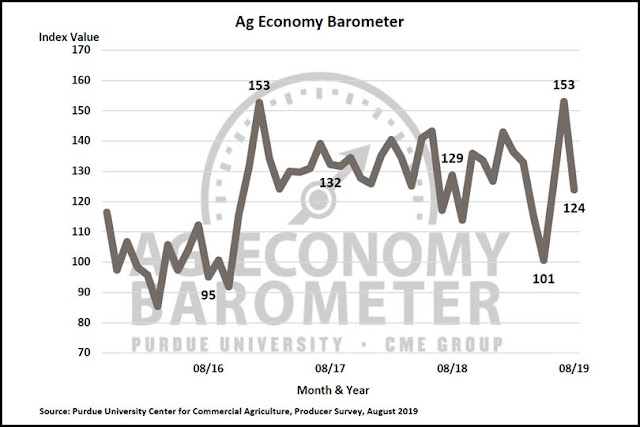 U.S. farmers were less optimistic and less inclined to make capital investments in their operations following the release of the U.S. Department of Agriculture’s (USDA) Crop Production report Aug. 12.

The Index of Current Conditions fell 19 points in August. That may be due to crop and livestock price declines in late July and early August following the larger-than-expected production estimates for corn and soybeans, which pushed crop prices lower.

“While USDA’s announcement of the Market Facilitation Program (MFP) payment rates did help alleviate concerns about 2019 income for many farmers, the big decline in the Index of Future Expectations indicates farmers are becoming more concerned about the future for U.S. agriculture,” Mintert said.

The Farm Capital Investment Index fell 11 points in August, but remained higher than it was in both May and June.

“So farmers have not lost all of their optimism with respect to investments in agriculture,” Mintert said.

The farmers surveyed were asked whether they thought the trade dispute with China will be settled soon.

In March, 43 percent of farmers said they expected a quick resolution but that fell to 29 percent in August.

“We followed up by asking farmers if they expect this soybean trade dispute with China to be resolved in a way that’s beneficial to U.S. agriculture, and the percentage of farmers expecting a beneficial outcome declined this month from 78 percent in July to 72 percent in August,” Mintert said.

The percentage of farmers expecting an unfavorable outcome to the trade spat rose from 19 percent to 25 percent in August.

Seventy-one percent of the 400 U.S. farmers surveyed Aug. 12-20 said they feel the 2019 MFP program will either somewhat or completely relieve their concerns about retaliatory tariffs’ impact on 2019 farm income.

Twenty-nine percent of respondents said they were not at all relieved by the MFP payment announcements.

The majority—58 percent—of farmers surveyed said they expected to see MFP payments for the 2020 crop year.

According to Mintert, that suggests a majority of farmers are counting on payments from USDA to help make up future income shortfalls.

That gives the barometer a potential score between 200 and zero each month.

The relative scores from each of the questions are added together, divided by the average value for the base period (October 2015 to March 2016) and then multiplied by 100.

A value greater than 100 indicates an increase in sentiment over the base period.