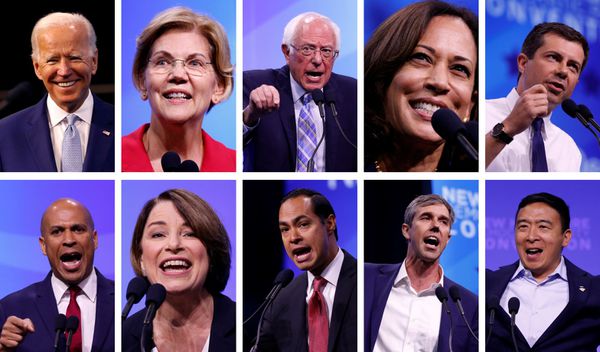 There’s an old joke often expressed well into banquets and conferences, where a speaker says, “We’re at the point where everything that needs to be said has been said, but not everyone has said it.” We’re already at that point with the Democratic primary debates. Tonight was a three-hour ordeal, and candidates largely repeated the arguments they made in the previous two debates. There’s not much reason to expect tonight will generate any dramatic swings in the polling in the coming days or weeks. The conventional wisdom will remain that this is a three-person race, with Joe Biden, Elizabeth Warren, and Bernie Sanders having far and away the best shots at the nomination.

Perhaps the most dramatic moment came when Julian Castro “went there” on Biden’s age. Discussing the government-based health insurance he envisioned, Biden’s verbiage was typically garbled, declaring, “If you lose the job from your insurance company, from your employer, you automatically can buy into this.” So is it a form of health insurance that you choose to buy into, or something you’re automatically enrolled in? Earlier Biden had said, “Anyone who can’t afford it gets automatically enrolled in the Medicare-type option we have.”

Castro jabbed, “You just two minutes ago said they would have to buy in. Are you forgetting what you said two minutes ago?” Everyone knew what Castro was hinting at – forgetfulness, age, maybe even Alzheimer’s – and just in case anyone missed it, as the crowd either went “oooh” or booed, Castro repeated the “are you forgetting what you said two minutes ago?” line. Whether or not you think Biden’s mental state and health are fair game for the public to consider, Castro’s attack will be seen by many as personal and over the line for a candidate to bring up. For what it’s worth, ABC News’s Matthew Dowd said he was hearing from other Democrats who thought the attack was a “disqualifier,” “mean,” and “vindictive.”

It was another just-good-enough night from Biden. He came out with vigor, and he seemed to be enjoying himself early on. But his answers got sloppy, choppy, and verbally messier as the night wore on. It wasn’t that his mind wasn’t working; it was that he would start a sentence, he would think of another point, and then try to jump to explain that other thought without clearly finishing the first one. A lot of his later answers devolved into “word salad.” There’s good reason to wonder if he’s going to really falter in one of these debates some night. But Biden closed well by discussing resilience and discussing the tragedies in his life. Almost nobody’s backing Biden because they think he’s got the best policies, or that he’s the most articulate advocate for them. They’re backing him because he’s the person they connect with the most.

Warren is playing it safe; she may not be throwing haymakers against anyone for a while. Almost all of the candidates seemed to have gotten a memo about speaking more positively about President Obama. Someone must have told Warren to avoid any tone or comment that could be labeled “shrill”; this was the softer, kinder, more uplifting Warren. This is probably exactly what you want to do when you’re in second place, there are still a lot of debates to go, and the guy in third is closer to you on policy. When pushed about her plan for withdrawal from Afghanistan, Warren answered that she traveled to that country with John McCain, she’s talked to a lot of experts, and three of her brothers served in the military. This is three-yards-and-a-cloud-of-dust debating.

Poor Bernie Sanders. He desperately needed a throat lozenge tonight. He still shouts almost every answer, he still rattles off statistics, he’s still insisting that the United States has the highest rate of child poverty in the world. (We don’t. It’s higher than it ought to be, but we’re not the highest.) But this style, tiresome as it can be over three hours, got Sanders to this point, and he’s unlikely to ever change.

A lot of these candidates have strengths on paper but just don’t shine on the stage, or they get lost in the crowd. Harris’s demeanor was a little different tonight, as if she had been coached to be warmer or funnier. She didn’t really go after Biden like she did in the first debate, and no one really went after her, either, now that she’s back in single digits.

Klobuchar had some slightly better-than-usual moments, arguing that Sanders’s health-care proposals are simply unaffordable, but it’s the same story as the previous two debates. She’s soft-spoken, pleasant, a little corny with her jokes . . . and completely forgettable.

The big news before the debate was Publisher’s Clearinghouse Sweepstakes candidate Andrew Yang’s pledge to give $1,000 a month to ten families for a year. It’s gimmicky, but maybe Yang needed to do something like that. When Yang gets a chance to speak – which isn’t often – he seems like a normal and relatable guy for a tech multimillionaire.

Buttigieg was fine, in the sense that no matter what was asked, he was able to pivot and maneuver to the anecdotes and points he wanted to make. Sometimes this got a little glaring, when he worked in a complaint about members of the military staying at Trump’s hotels in Scotland when asked about his policy proposals for Afghanistan. Trump-bashing is a really convenient crunch for all of these candidates when they’re in a jam, and they use it when their proposals about what to do after Trump are fuzzy, excessively optimistic, or implausible.

Remember when so many analysts said Cory Booker was one of the big winners of the last debate? Here we are, a month later, and nothing has changed for Booker in the polls. He was good again tonight. A month from now, will anything change?

Reports of the dramatic reinvention or relaunch of Beto O’Rourke are greatly exaggerated. Everything he says sounds like a pander, including “good evening.” He is still clumsily answering in Spanish. His pledge, “Hell yes, we’re going to take your AR-15s” ensures he’ll never get elected statewide in Texas. For almost every issue, he shares an all-too-perfect anecdote about someone he met on the trail. This was the sort of rhetorical maneuver that Bill Clinton and Barack Obama did smoothly and convincingly. With O’Rourke, you can always see the strings.

For anyone who actually knows a thing or two about these issues, these debates are pretty painful, watching ten candidates offer variations of bumper-sticker slogans, pretending that we can withdraw our way to world peace, regulate our way to good health, release our way to no crime, and spend our way to prosperity.

At one point, Yang asked, “Why do we lose to the fossil-fuel companies? Why do we lose to the gun lobbyists? We all know why. Our government has been overrun by money and corporate interests.” Really? That’s the only reason Democrats lose? Because there’s a lot of money that comes from Steyer, and Bloomberg, and Soros, and Hollywood, and trial lawyers, and academia, and so on. Corporate America’s hardly a lockstep right-wing force in American politics, particularly on social issues. The idea that the only reason Democrats lose in elections or policy battles is the influence of sinister wealthy conservatives is a fairy tale that liberals tell themselves so they can sleep comfortably at night, secure in their self-righteousness.