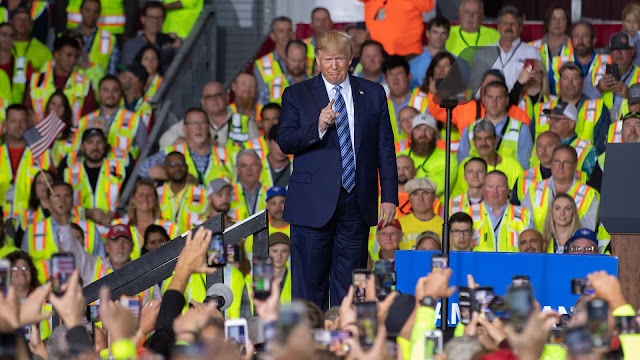 Union workers at the Shell petrochemical plant in Pennsylvania where President Trump spoke earlier this week were given the option of attending or losing out on wages, the Pittsburgh Post-Gazette reports.

According to the newspaper, a contractor with the plant told workers attendance at the event was “not mandatory.”

But the contractor added that only the employees who were onsite at 7 a.m. and prepared to have their identification cards scanned and attend the speech would earn money for the time, the newspaper reported.

In a statement to The New York Times, Shell spokesman Ray Fisher said “it was understood some would choose not to attend the presidential visit and were given the option to take paid time off.”

“As with any workweek, if someone chooses to take [paid time off] they are not eligible to receive the maximum overtime available,” he continued.

Fisher explained that the day “was treated as a training (work) day with a guest speaker who happened to be the president,” adding that workers also took part in “safety training and other work-related activities” on Tuesday morning.

“It’s not uncommon for us to shut down the site for quarterly visits from VIPs — popular sports figures like Rocky Bleier and Franco Harris have visited the site to engage with workers and to share inspirational messages. Shell/Penske NASCAR driver Joey Logano was another guest at the site,” Fisher told the Post-Gazette.

The workers were also reportedly warned that “no yelling, shouting, protesting or anything viewed as resistance will be tolerated at the event," according to the Post-Gazette.

Ken Broadbent, who works as a business manager for Steamfitters local 449, one of the unions working at the construction site, told the paper that “this is just what Shell wanted to do and we went along with it.”

The White House did not immediately respond to a request for comment.