We need to pay more attention to situation in Hong Kong 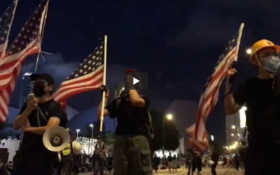 I know it’s the easiest thing to complain that “the media” is not focused on the right issues. But there is just too little reporting about China and Hong Kong.

Chinese authorities are preparing for a crackdown in Hong Kong. For a time, Chinese media did not report on the protests in Hong Kong, but lately they have tried to portray them as dangerous, violent, and even “terroristic.” This is actually easier to accomplish in China than you may imagine because the mainland criminalizes protests and free assemblies of all sorts. Although many mainlanders have developed a habit of traveling to Hong Kong to shop for luxury goods, the political culture of Hong Kong is difficult for many mainlanders to entirely apprehend.

Videos have been escaping across social media showing a massive military and police buildup in Shenzhen, just across from Hong Kong. Leaders in Peking are becoming hysterical. Yang Gaung, a spokesman for China’s Hong Kong and Macau Affairs office denounced the “deranged and severe criminal activities committed without regard for the consequences.” In truth it is likely that the Chinese Communist Party has been the instigator: Government officials are believed to be working with triads and police in Hong Kong to create an atmosphere of violence.

Astonishingly, during our trade war, President Trump has been silent about Chinese human rights and political abuses, too busy retweeting Jeffrey Epstein speculation. Our media have reported some of the broad strokes of the protests and Chinese response, but hardly anything in depth. Too busy telling us about the damage done to U.S. soybean interests by the trade war to notice the economic and political meltdown happening in Asia?

I’m not convinced that China can impose itself on Hong Kong if somewhere between 1 to 2 million people concentrated there remain determined not to cowed by them. At least not without doing incalculable harm to their economy. But can we at least get better reporting on this incredible conflict?