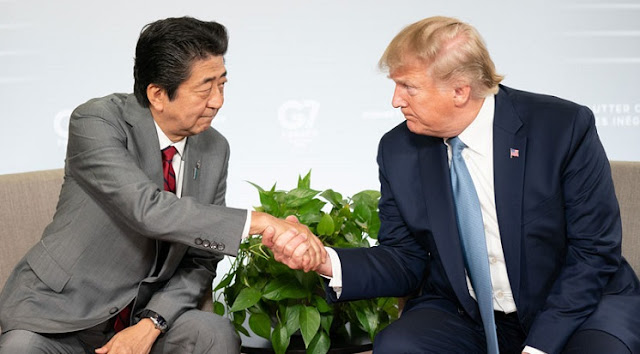 After almost a year of negotiations, the United States and Japan have agreed to the framework for a free trade agreement.

“We’ve been working on a deal with Japan for a long time. It involves agricultural, and it involves e-commerce and many other things,” Trump said. “It’s a very big transaction, and we’ve agreed in principle.”

The president said the deal involves billions of dollars and is tremendous for U.S. farmers.

“One of the things Prime Minister Abe has also agreed to is we have excess corn in various parts of our country, with our farmers, because China did not do what they said they were doing to do,” Trump said. “Prime Minister Abe, on behalf of Japan, they’re going to be buying all of that corn.”

Automobile and auto part tariffs are not included.

Abe said the Japanese private sector will be purchasing U.S. corn as the country deals with pest pressure.

“They import about $14 billion worth of U.S. agricultural products, and this will open up markets to over $7 billion of those products,” Lighthizer said.

Although the exact details of the trade deal are not yet available, the American Farm Bureau Federation (AFBF) applauded the progress.

“America’s farmers and ranchers are pleased to hear that the U.S. and Japan may be close to a trade deal with includes agriculture,” AFBF President Zippy Duvall said. “This is much-needed good news on the agricultural trade front.”

A trade deal between the U.S. and Japan will benefit the beef, pork, wheat, wine, ethanol and dairy sectors, Lighthizer noted.

Dan Halstrom, president and CEO of the U.S. Meat Export Federation (USMEF) said the deal is tremendous for the beef and pork industries, which faced higher tariffs in Japan due to the U.S.’ absence from other trade agreements like the Trans-Pacific Partnership.

“It will level the playing field for U.S. beef and pork in the world’s most competitive red meat import market,” Halstrom said.

The U.S.’ top agricultural exports to Japan in 2018 were: corn, beef and beef products, pork and pork products, soybeans and wheat.

The U.S. imported around $725 million in agricultural products from Japan in 2018.