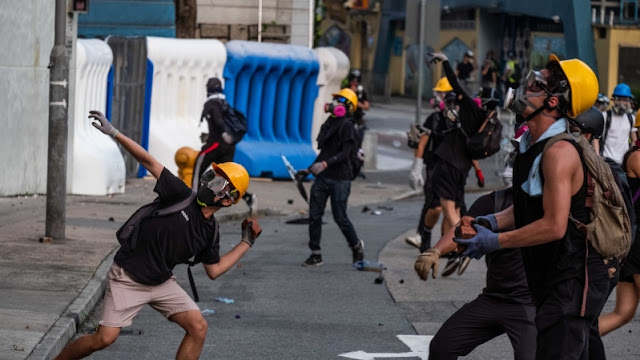 The State Department has stepped up its travel warning for American tourists going to Hong Kong amid violent protests on the island.

“Exercise increased caution in Hong Kong due to civil unrest,” the department said in its Level 2 travel advisory posted Wednesday.

“Since June 2019, several large scale and smaller political demonstrations have taken place in various areas of Hong Kong. Most have been peaceful, but some have turned confrontational or resulted in violent clashes,” it added. “The protests and confrontations have spilled over into neighborhoods other than those where the police have permitted marches or rallies. These demonstrations, which can take place with little or no notice, are likely to continue.”

The State Department urged travelers in Hong Kong to monitor local media for updates on the protests, avoid the demonstrations, keep a low profile and exercise caution “if unexpectedly in the vicinity of large gatherings or protests.”

The warning comes as pro-democracy demonstrations against a bill that would allow some Hong Kong residents to be extradited to the Chinese mainland have grown violent. Even though the bill was suspended and declared "dead" by Hong Kong's chief executive, protests expanded into the city’s luxury shopping district this weekend, with many demonstrators targeting a police station with bricks and rocks.

The protests started two months ago over the extradition legislation, with protesters saying suspects could face torture and unfair trials in China, and have gradually transformed into calls for broader democratic reforms. Protesters have also called for Chief Executive Carrie Lam to resign and for the government to probe alleged police brutality.

Hong Kong police say 589 people have been arrested in the protests since June 9 and face charges including rioting, which has a maximum prison penalty of 10 years, according to The Associated Press.

Police have shot tear gas, rubber bullets and other projectiles at demonstrators, who have responded with metal sticks, bricks, gasoline bombs and other debris. Reports have surfaced of police taking little action while demonstrators were attacked by unknown people suspected of having ties to organized crime groups.

The central government in Beijing has thus far refrained from visibly intervening in the uprising, which it has said is fueled by “violent radicals” that were egged on by politicians in the U.S. and Taiwan, according to the AP.