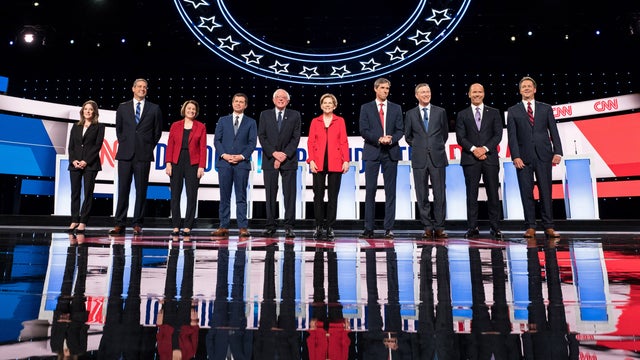 Over at the Washington Post, Margaret Sullivan fumes about the quality of the first two Democratic debates, lamenting a “frustratingly tiny and rigidly enforced response time, outsize attention to fringe candidates and divisive questions.”

Almost all of the problems Sullivan diagnoses stem from the fact that the Democratic field has 25 candidates running and that the Democratic National Committee, not wanting to appear unfair to anyone, set the limit at two ten-candidate debates. There are no good formats for ten-candidate debates, only less bad ones. If you want to have a better quality of debate, the DNC has to tell more candidates something they will hate hearing: “You’re just not popular or important enough to participate in our prime-time debates.”

Yes, 60 seconds is an extremely short period of time to explain any policy, decision, or idea. But the short time limits are there because otherwise the last candidate to get a question won’t speak for the first half-hour or so. In the first debate on MSNBC, Marianne Williamson didn’t speak for the first 30 minutes. Even with a seemingly reasonable two-minute limit, if the moderators try to spread around the question evenly, about twenty to twenty-five minutes will pass in between answers from any individual candidate. (Nine candidates, two minutes each for answers, plus time for questions and applause. And this is separate from commercial breaks!)

Pick your poison: short time limits for answers, or having candidates standing around waiting for nearly a half hour to say anything.

The “outsize attention to fringe candidates” from CNN is also probably a response to MSNBC’s experience. MSNBC wasn’t particularly interested in making sure candidates got roughly equivalent air time. Andrew Yang spoke for three minutes over two hours. He can probably fairly ask what the point of having him on stage is, if he’s barely going to get any questions or opportunities to speak. Then again, he and the other asterisk candidates would really hate being left off the stage entirely.

Sullivan wants less “conflict-oriented framing” in questions. But the point of a debate is not to reassure Democrats by showcasing all of their candidates in harmony. Conflict — or at the very least, contrast —  is more or less the point. Whether candidates and partisans like it or not, voting in an election generally follows the Ricky Bobby standard: “If you’re not first, you’re last.” If you’re my first choice, you get my vote on primary day. If you’re my second choice, you get nothing. There’s no room on the ballot to write, “this other guy is pretty good, too.” (Heck, even the salesmen at Mitch and Murray got a set of steak knives for second place.) Thus, the goal of every candidate on the stage is to demonstrate that they are the best candidate on that stage, not merely a good one*.

To stand out from all the rest, a candidate must show how they are different, and better, than all the other candidates. I am better that those other ones because of those viewpoints, those votes, those decisions, those scandal from their pasts. This is not done out of hatred of the other candidates. It is simply a necessary step of campaigning. A debate where every candidate agreed that they were all pretty much the same in their viewpoints, that none of them had better qualities or more relevant experience than the others, and that all of them are equally good selections for the office. . . would probably leave a lot of voters confused. If the candidate doesn’t believe he’s the best choice for the job. . . why should anyone else?

Every once in a while, you’ll get a presidential candidate who’s more or less openly campaigning for vice president and thus not interested in criticizing the frontrunner.