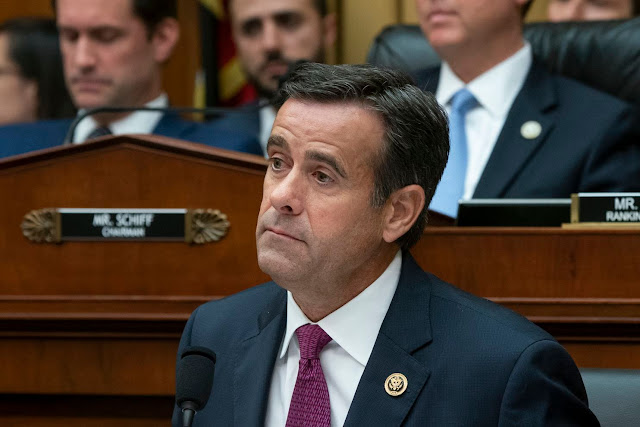 President Trump said Friday that he will not nominate Rep. John Ratcliffe (R-Texas) to be director of national intelligence, just days after announcing plans to tap the GOP congressman to replace Daniel Coats.

Trump blamed the media for treating Ratcliffe "very unfairly" in a string of tweets sent Friday afternoon, saying Ratcliffe had decided to stay in Congress and withdraw his name from consideration. Trump said he plans to announce an official nominee "shortly."

"Our great Republican Congressman John Ratcliffe is being treated very unfairly by the LameStream Media. Rather than going through months of slander and libel, I explained to John how miserable it would be for him and his family to deal with these people,” Trump tweeted Friday afternoon.

“John has therefore decided to stay in Congress where he has done such an outstanding job representing the people of Texas, and our Country. I will be announcing my nomination for DNI shortly.”

Trump's abrupt announcement came after days of scrutiny of Ratcliffe's background and past statements critical of former special counsel Robert Mueller's Russia investigation. Several Republican senators had declined to weigh in on his nomination, as he withstood a barrage of criticism from Democrats for being too political for the role.
Trump had not officially nominated Ratcliffe.

Several news reports have described Ratcliffe as overstating parts of his biography relating to his work on terrorism cases as a federal prosecutor in Texas since Trump announced his intention to nominate him on Sunday.

Sen. Mark Warner (Va.), the Senate Intelligence Committee’s top Democrat, said Thursday it would be “clearly disqualifying” if it were true that Ratcliffe padded his resume.

Ratcliffe said in a statement Friday that he asked Trump to nominate someone else for the position, explaining he didn’t want the debate around his nomination “however untrue, to become a purely political and partisan issue.”

"While I am and will remain very grateful to the President for his intention to nominate me as Director of National Intelligence, I am withdrawing from consideration,” Ratcliffe said.

“I was humbled and honored that the President put his trust in me to lead our nation's intelligence operations and remain convinced that when confirmed, I would have done so with the objectivity, fairness and integrity that our intelligence agencies need and deserve,” he continued. “However, I do not wish for a national security and intelligence debate surrounding my confirmation, however untrue, to become a purely political and partisan issue.”

Trump did not answer questions about Ratcliffe's withdrawal on Friday afternoon during a White House event on trade. White House officials were notified in recent days that his nomination likely would face an uphill climb in the Senate, according to an administration official.

Trump’s decision to pull the nomination adds a fresh layer of scrutiny to the intelligence community shakeup. It was not immediately clear who Trump would choose for the role now that Ratcliffe has withdrawn.

Relatedly, Trump is also considering removing Sue Gordon, Coats’s current deputy and a career intelligence officer, so he can name someone else as acting DNI when Coats leaves on Aug. 15, according to a person familiar with the process. The White House and DNI did not return multiple requests for comment about Trump’s plans for the acting director.

A federal statute states that the principal deputy Director of National Intelligence — the position Gordon currently holds — “shall act” as DNI during a vacancy in that position.

However, if Gordon were to resign or be removed, something Warner raised concerns about, that would allow Trump to choose from a larger group of officials to serve as acting DNI.

Friday's announcement also highlighted ongoing problems with the White House’s vetting process, which have plagued the administration since its earliest days.

Ratcliffe became the latest Trump appointee who faced scrutiny about their background and were forced to withdraw their name after the president announced his intention to install them in top positions.

In the past 15 months, Ronny Jackson withdrew as Trump’s pick to lead the Department of Veterans Affairs, Stephen Moore and Herman Cain pulled out consideration for the Federal Reserve Board and Heather Nauert took herself out of the running for U.N. ambassador.

Trump announced that Coats would resign on Sunday — capping months of rumors about his potential ouster — and that he intended to tap Ratcliffe for the role.

Ratcliffe, a three-term congressman who sits on the House Intelligence, Judiciary and Homeland Security committees, has received criticism for having a dearth of national security qualifications when compared to previous intelligence chiefs.

He is viewed as a staunch Trump ally and has criticized the origins of the Russia investigation, suggesting the FBI acted improperly in its investigation of the Trump campaign’s ties to Russia.

Compared to Coats, a former GOP senator from Indiana, Ratcliffe is a somewhat unknown commodity in the Senate. Several Republicans, including Senate Majority Leader Mitch McConnell (Ky.), withheld judgment about his nomination.

“I’ve yet to meet him and know very little about him. Frankly, his name was unknown to me prior to my reading the transcripts of the Mueller hearings,” Sen. Susan Collins (R-Me.), an Intelligence panel member, told reporters Thursday, referring to Ratcliffe’s aggressive questioning of Mueller during congressional hearings last week.

“I am grateful that he will continue serving the people of Texas in the House,” Burr said in a statement. “As the White House determines its next nominee, I‘m heartened by the fact that ODNI has an experienced and capable leadership team to help see it through this transition. However, there is no substitute for having a Senate-confirmed director in place to lead our Intelligence Community. I remain committed to moving the official nomination through regular order once it is submitted to the Senate.”

Senate Minority Leader Chuck Schumer (D-N.Y.) cheered the development, saying that Ratcliffe “never should have been considered in the first place.”

“The next Director of National Intelligence must be someone who is nonpartisan, sees the world objectively and speaks truth to power,” Schumer said in a statement.