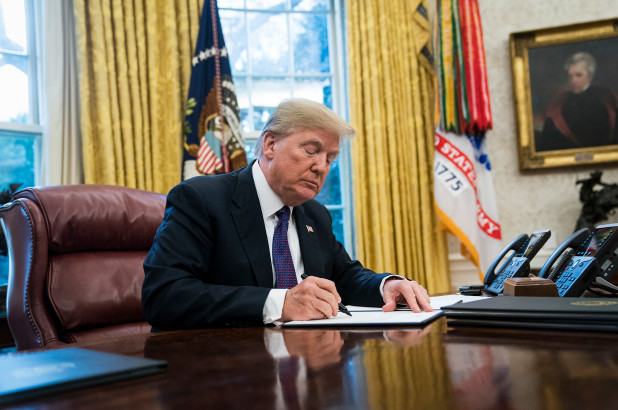 The new law suspends the debt ceiling through July 2021, removing the threat of a default during the 2020 elections, and raises domestic and military spending by more than $320 billion compared to existing law over the next two fiscal years.

Trump signed the measure without fanfare at the White House one day after the Senate voted 67-28 to send it to his desk. The House last week passed the budget package by a vote of 284-149 before starting its August recess.

Fiscal hawks and some conservative Republicans decried the measure, which is projected to add nearly $2 trillion to the projected national debt over the next decade.

Maya MacGuineas, president of the Committee for a Responsible Federal Budget, said Thursday the agreement marks “a shameful period of fiscal recklessness in Washington that is unprecedented in the context of our current fiscal state.”

“Going forward, neither side can claim a mantle of responsible governing, and few have any moral ground to stand on–this is a bipartisan failure,” she said in a statement.

“Budget Deal is phenomenal for our Great Military, our Vets, and Jobs, Jobs, Jobs! Two year deal gets us past the Election,” the president tweeted Thursday before the Senate vote. “Go for it Republicans, there is always plenty of time to CUT!”

“Today we saw an example of how government should work. Democrats and Republicans put partisanship aside and came together in favor of securing a stronger future for American families and upholding the full faith and credit of the United States,” House Budget Committee Chairman John Yarmuth (D-Ky.) said in a statement.

While the deal averts a debt default, it does not remove the possibility of a government shutdown at the conclusion of the fiscal year ending Sept. 30. Instead, it sets spending levels for House and Senate appropriators.

Congress still must pass roughly a dozen spending bills, or a package containing the various bills, which Trump also must sign to keep the government open.