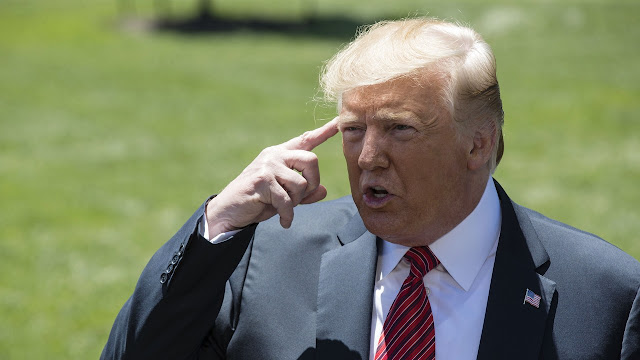 President Trump on Thursday accused the press of trying to "crash the economy," seeking to deflect blame amid signs of a global economic downturn.

"The Fake News Media is doing everything they can to crash the economy because they think that will be bad for me and my re-election," Trump tweeted a day after U.S. stocks suffered their biggest drop of the year. "The problem they have is that the economy is way too strong and we will soon be winning big on Trade, and everyone knows that, including China!"

The remarks also came a day after Trump said the Federal Reserve was to blame for holding back the economy.

The president regularly decries coverage he dislikes as "fake news," using the media as a foil to rile up his base. He has previously blamed the press for causing tensions in the country in the wake of violence, and as recently as Tuesday suggested he would coast to reelection if he benefited from a "fair press."

Trump's tweet on Thursday escalated that narrative, suggesting that the press was attempting to influence the economy to weaken his prospects at winning a second term in office.

On Wednesday, U.S. stock markets had their biggest decline of 2019, with the Dow Jones Industrial Average plunging 800 points, or 3 percent.

The Dow Jones bounced back slightly on Thursday, and was up roughly 80 points as of 1 p.m.

Wednesday's sell-off came after the yield on 10-year U.S. Treasury bonds fell below the yield on two-year bonds for the first time since 2007, when the previous recession began. When 10-year bonds trade for less than two-year bonds, that inversion is considered a leading indicator of a possible economic downturn in the next 12 to 18 months.

The yield curve inversion follows Trump's decision Tuesday to delay further tariffs on China until after the bulk of the holiday shopping season, reflecting mounting fears that the trade war could derail the U.S. economy.

Trump has been adamant that his posture toward Beijing is working, repeatedly arguing that the U.S. economy is in a strong position even as some lawmakers and experts worry about the toll of an unending trade war between the world's two biggest economies.