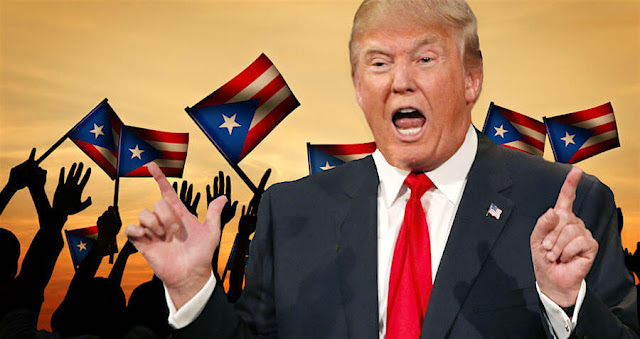 President Trump on Wednesday assailed Puerto Rico as one of the “most corrupt places on earth” while defending his administration’s disaster relief efforts as the island braces for another tropical storm.

“Puerto Rico is one of the most corrupt places on earth. Their political system is broken and their politicians are either Incompetent or Corrupt. Congress approved Billions of Dollars last time, more than anyplace else has ever gotten, and it is sent to Crooked Pols. No good!” Trump wrote in a pair of tweets.

“And by the way, I’m the best thing that’s ever happened to Puerto Rico!” he added.

The tweets come as Tropical Storm Dorian barrels toward Puerto Rico and officials prepare for a direct hit. Trump approved an emergency declaration late Tuesday in order to divert federal assistance to bolster response efforts to the storm.

The president has both defended his administration’s response to Hurricane Maria in 2017 — which came under widespread criticism — and lashed out at Puerto Rican officials over the past few days. The Puerto Rican government has been in a state of turmoil over the past several weeks after its governor resigned amid massive protest over his leadership.

Earlier Wednesday, Trump said his administration was closely tracking the new storm and that the Federal Emergency Management Agency (FEMA) would do a “great job” responding. He also criticized San Juan Mayor Carmen Yulín Cruz as “incompetent,” after she said Trump should “get out of the way” and let others prepare for Dorian.

On Tuesday, Trump again inflated the amount of aid sent to Puerto Rico in the wake of Hurricane Maria by claiming Congress sent $92 billion in aid to the U.S. territory.

The White House is also defending the Trump administration’s plans to divert $271 million in funds from the Department of Homeland Security (DHS), including money from FEMA, to pay for immigration detention centers and court hearing space at the southern border.

White House spokesman Hogan Gidley, however, claimed in an interview with Fox News Wednesday morning that Democrats and media outlets were offering misleading accounts, claiming the money cannot be used for recovery or preparedness efforts.

“The Democrats know that this money isn’t being diverted from anything that can be used for recovery efforts or preparedness efforts,” Gidley said. “This is a flat-out lie.”

Other Democrats have also ripped the Trump administration for diverting the DHS funds for immigration enforcement efforts.

“Congress appropriated these funds to meet the American peoples’ priorities and I strongly oppose this effort to undermine our constitutional authority.”