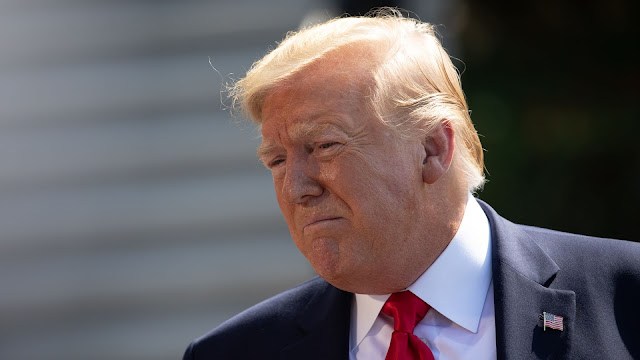 President Trump is facing one of the most crucial periods of his time at the White House as he returns to Washington from a 10-day sojourn to New Jersey.

Trump, who has made jobs and the economy the centerpiece of his presidency, is facing growing fears that the economy could head into a recession next year amid a trade war and sluggish growth in China that threatens to set back the global economy.

A downturn could be devastating to the Trump brand, which is built on a growing economy and an endless series of economic wins.

Trump also faces a decision about how far he wants to go on gun control after two mass shootings in El Paso, Texas, and Dayton, Ohio, reinvigorated efforts in Congress to move forward with legislation.

The El Paso shooting was allegedly perpetrated by a suspect who espoused white nationalist and anti-immigrant views, which has in turn inflamed scrutiny of Trump’s own rhetoric.

Politics and the coming presidential election year are shadowing everything.

Republicans are seeing more and more signs that suburban voters across the country could further turn away from their party and president — something that could cost them the White House.

Gun violence and Trump’s rhetoric on race and immigration are both issues that Democrats believe will resonate to their benefit with suburban voters — particularly with women.

But for the White House, it is the economy that is likely to consume Trump’s thoughts given the potential for a downturn to hurt the president with additional voters.

Reports have circulated that Trump has been rattled by the talk of a recession, as the economy’s strength over the last several years has been seen as his calling card for winning reelection.

The president’s decision to delay tariffs he had planned to impose on imports from China appeared to signal his anxiety, and Republicans critical of Trump see it as a tell that he is not ready to preside over more difficult economic times.

“It’s clear that we could be heading into a challenging economic climate, or at least one decidedly less robust than the past several years, and it’s clear that Trump does not want to bear that responsibility,” said Republican strategist Doug Heye.

“Part of this is because Trump is more acutely aware of his brand than any other president we’ve had, and a downturn would go against his brand as a successful executive,” Heye added. “A lot of the 2020 scenarios includes the phrase ‘but Trump should win.’ If we see a recession, that puts his reelect in serious jeopardy.”

At his New Hampshire rally last week, Trump projected confidence on the economy and blamed the media for talking the economy down. He also threatened economic doom if he isn’t reelected in 2020, saying that even his critics should back him if they care about their 401k retirement plans.

"Whether you love me or hate me, you gotta vote for me," he said.

On guns, the president, a lifetime New Yorker, has given mixed signals over how far he is willing to go.

Over the last week, Trump has said he supports background checks and has fielded calls from key senators on potential gun control legislation, but the conversations have not yielded firm proposals. Trump has not signaled a willingness to press congressional Republicans hard to get background check legislation done.

Trump on Thursday told supporters at the New Hampshire rally that he would “always uphold the Second Amendment" and spoke of the need to build new mental health facilities, suggesting that would lead to a decline in gun violence.

The comments raised questions about whether Trump is having second thoughts about backing stronger gun laws in the wake of recent mass shootings.

A senior administration official said Trump has been in regular contact with members of his legislative affairs team about potential responses to the Dayton and El Paso massacres.

“He’s been clear. If there are reforms they need to be meaningful,” the official said. “It’s about actually preventing one of these tragedies again.”

Passing any gun control legislation largely falls on the Senate, where there has been little GOP support for background checks and other gun control measures. Trump claimed earlier this week that Senate Majority Leader Mitch McConnell (R-Ky.) and other Republicans are in favor of background checks, without offering up any evidence.

Democrats, meanwhile, are seeking to ratchet up pressure on their Republican counterparts to act on gun reform, an effort that is sure to continue into September as the House Judiciary Committee returns early to Capitol Hill to debate legislation to address gun violence.

It’s not just guns and the economy that will be on Trump’s mind this week.

He’ll welcome Romania’s president to the White House, deliver remarks at an AMVETS conference in Kentucky and travel to France at the end of the week to participate in the annual summit for the Group of Seven nations.