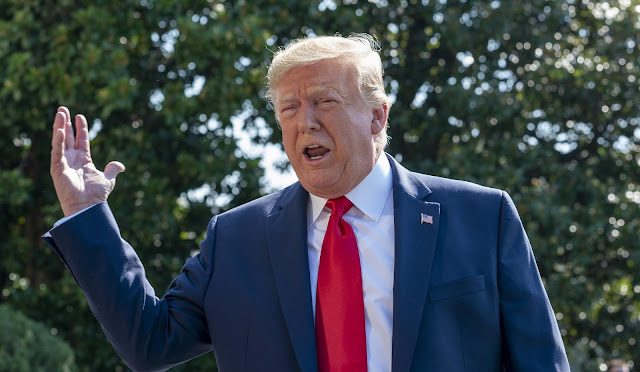 President Trump on Tuesday defended promoting a baseless conspiracy theory that ties the Clintons to the death of accused sex trafficker Jeffrey Epstein, saying it was "fine" because he was only retweeting what someone else said.

"The retweet — which is what it was, it was a retweet — was somebody that is a very respected conservative pundit. So I think it was fine," Trump told reporters before heading to Pennsylvania for a speech.

Asked later if he truly believes the Clintons are involved in Epstein's death, Trump said, "I have no idea" before pointing to former President Bill Clinton's relationship with the disgraced financier.

Trump, who ran in the same social circles with Epstein before he said they had a falling out, said he would like there to be a "full investigation" into the convicted sex offender's death.

"I want a full investigation and that's what I absolutely am demanding," Trump said.

Trump on Saturday shared a tweet from Terrence K. Williams that blamed Epstein's death on former Secretary of State Hillary Clinton and former President Clinton without providing any evidence.

The tweet included the hashtags #ClintonBodyCount and #ClintonCrimeFamily, as well as a photo of both the former president and former secretary of State.

Attorney General William Barr said Monday that Justice Department officials will thoroughly investigate “serious irregularities” at the Metropolitan Correctional Center (MCC) where Epstein was found dead of an apparent suicide over the weekend.

Epstein was found dead early Saturday in his jail cell in the New York federal prison, where he was awaiting trial on federal sex trafficking charges. He was a registered sex offender following an earlier conviction in 2008 of soliciting sex from underage girls.

Trump and Epstein were known to run in the same social circles in New York and Florida. Trump told New York Magazine in a 2002 article that Epstein is a "terrific guy" and "a lot of fun to be with."

The president said last month in the wake of fresh charges against Epstein that the two had a falling out 15 years ago.