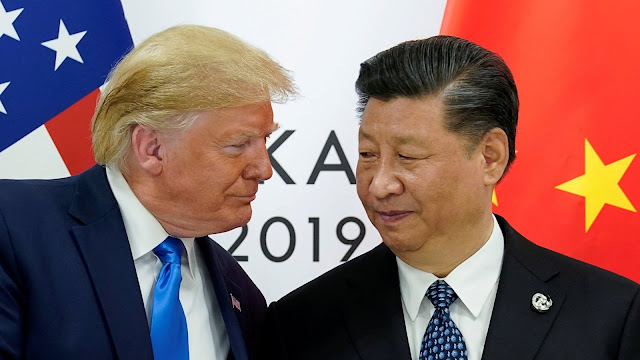 President Trump said Friday that his efforts to pressure China into a deal on trade has led Beijing to try to limit the violence during increasingly tense protests in Hong Kong.

"I think if it weren’t for the trade talks, Hong Kong would be in much bigger trouble," Trump told reporters as he left the White House for Camp David.

"I think it would’ve been much more violent," he added. "I really believe China wants to make a deal, and they know it puts us in a very bad position if there’s not a humane way of handling the problems.

"And I’ve let them know, look, handle it in a humane fashion," Trump continued. "And we’ll see. But I do believe that because of what I’m doing with trade, that’s very much keeping down the temperature in Hong Kong."

Anti-government protesters in Hong Kong, a semi-autonomous region, have staged mass protests for months on end. They began in response to a since-suspended bill that would allow some citizens to be extradited to China.

The protests have grown increasingly tense and turned violent at times, with photos and videos of bloodied protesters circulating on social media following clashes with armed riot police.

The New York Times reported Friday that officials in Beijing have opted to escalate the arrests of demonstrators and are unlikely to give in to protesters' demands, meaning the conflict could drag on indefinitely.

Trump has repeatedly called on China to handle the protests in a humane way, but Friday was the first time he directly raised ongoing trade talks as a method to tamp down tensions.

The U.S. and China have levied tens of billions of dollars of tariffs on one another as part of an ongoing trade war. The Trump administration is set to increase tariffs on certain Chinese goods on Sunday in the latest escalation.

The president has insisted there have been recent communications between the two sides in an effort to reach a deal, though his comments have been light on specifics.