Trump arrives at G-7 amid disputes 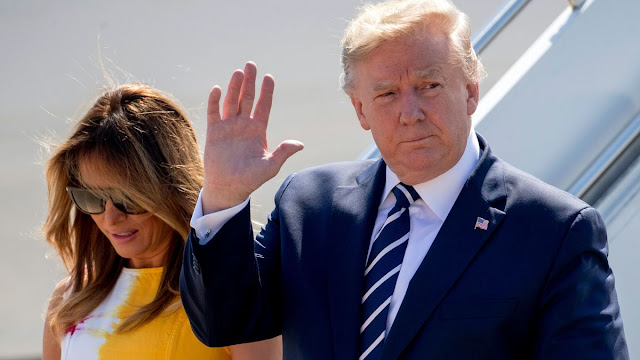 President Trump on Saturday arrived for the annual Group of Seven (G-7) economic summit in France amid major differences among world leaders over issues such as trade, climate change and the situation with Iran.

Trump's past disputes with leaders attending this weekend's summit were in full focus as he arrived in the seaside town of Biarritz, with multiple global delegations emphasizing a push for unity heading into the weekend of discussions.

The president held a working lunch with his French counterpart Emmanuel Macron shortly after arriving on Saturday. Macron, the host of this year's summit, has called for leaders to put a focus on climate change and other issues this weekend.

“We have to work very hard because I see we do share the same objectives,” Macron said during the luncheon. “Thanks again, Mr. President, for taking the time being here and being a partner.”

Trump emphasized in brief remarks that the U.S. and France have "been friends for a long time."

"We have a very good relationship — sort of, I think I can say, a special relationship," he said, adding, "I think we'll accomplish a lot this weekend."

This year’s summit comes as Trump ramps up his "America First" policy approach on a slate of pressing issues, often to the chagrin of European allies and other nations in the G-7 who favor a more collective approach.

Several European figures on Saturday spoke out against the Trump administration's widening trade war with China after Washington's announcement the previous day that it would raise tariffs on hundreds of billions of dollars in Chinese goods following new tariffs unveiled by Beijing earlier in the day.

British Prime Minister Boris Johnson said he planned to urge Trump to ease tensions with China when the pair sit down for a breakfast on Sunday morning. European Council President Donald Tusk also slammed what he called “senseless disputes” on trade between Trump and other global leaders.

“For me, it’s absolutely clear that if someone, for example ... the United States and President Trump, uses tariffs and taxation as a political instrument, tool for some different political reasons, it means that this confrontation can be really risky for the whole world, including the EU,” Tusk told reporters.

Trump has long been known to shy away from diplomatic norms when attending major heads-of-state meetings, and he cut short his trip to last year's G-7 summit in Canada amid personal feuds with several other leaders in attendance at the event.

The president excoriated Canadian Prime Minister Justin Trudeau as “meek and mild” and “dishonest & weak” during their conversations on trade at last year’s summit, and he threatened to withhold the United States’s signature from a joint communique then.

This year's summit is expected to end without attendees signing a joint communique, something Macron signaled before the summit began. But various political figures and critics of Trump have argued that it is still important for leaders to offer a message of unity.

"As president, @BarackObama used these summits as means of coordinating a joint response to the global financial crisis. The contrast is stark," former Obama senior adviser David Axelrod tweeted Saturday.

While this weekend's events is sure to include its share of ceremonial flair, leaders will be gathering amid sharp contrasts over various U.S. and European policies that have put a strain on trans-Atlantic relationships over the past year.

Trump has needled Macron over his 2018 comments when he pushed for a "true, European army," highlighting the potential threat of Russia and saying that the continent needed “to defend itself better alone,” and he has gone after German Chancellor Angela Merkel over trade and a Russian oil pipeline.

Before departing the White House on Friday night for the trip to France, Trump renewed his threat to slap tariffs on French wine after Macron signed a digital services tax on tech companies making at least 750 million euros annually, something that would affect U.S.-based tech giants such as Apple, Google, Facebook and Amazon.

"Those are great American companies, and frankly I don’t want France going out and taxing our companies," Trump said. "And if they do that ... we’ll be taxing their wine like they’ve never seen before."

That prompted a warning from the EU's Tusk: "The EU stands by France. If the U.S. imposes tariffs on France, the EU will respond in kind."

Other issues sure to showcase differences between those gathered this weekend include climate change and the international strategy on dealing with Iran.

Trump has ratcheted up his rhetoric against Iran over its military activities and uranium enrichment, slapping sanctions on its government in the hopes of pressuring it to the negotiating table. In the meantime, European heads of state are scrambling to persuade Tehran to abide by the Obama-era nuclear pact, the same deal from which Trump withdrew the U.S. last year and continues to deride.

A French diplomat told The Associated Press that Macron used the working lunch with Trump on Saturday to outline a French plan aimed at easing tensions with Iran, saying France has been working on the plan for weeks.

Macron, who is setting the agenda for this year’s summit as its host, has also called on leaders to discuss and take further action to tackle climate change, specifically pointing to fires that are ripping through the Amazon.

Trump, who famously withdrew the U.S. from the Paris climate accord, has cast doubt on the veracity of climate change itself and has a relationship with Brazilian leader Jair Bolsonaro, whose policies some claim have exacerbated the blazes.

The ongoing tensions appeared close to boiling over Saturday, when Tusk took Trump to task over his trade policies, saying, “This may be the last moment to restore our political community.”

President Trump on Tuesday offered his first reaction to the United States surpassing 200,000 deaths from COVID-19, telling reporters it was "a shame" but that it could have been worse.
"I think it’s a shame. I think if we didn’t do it properly and do it right you’d have 2.5 million deaths," he told reporters.
Trump initially ignored a question about why he hadn't said anything about the grim milestone before answering the same question from another reporter. He pointed to his decision to limit travel into the country from China and Europe.
"But it’s a horrible thing. Should have never, ever happened," Trump said. "China let this happen, and just remember that."
Experts have credited the restrictions on travel from China in late January with buying the U.S. more time to respond, though the decision to block travel from Europe came in mid-March, after the virus had likely spread throughout the country.
The United States earlier Tuesday recorded 20…
Read more

A testing firm used by the state of Texas is under federal scrutiny for problems that call into question the accuracy of the company’s COVID-19 test results, according to an investigation by the Dallas Morning News. The newspaper reported on Friday that the state had suspended business with NovaDX, also known as Nova Labs, but only after being notified that the news media was aware of the federal investigation.
The state had previously halted business with the California-based firm back in June after questions about the accuracy of tests done for nursing homes. The state’s review found the problems had been addressed and testing resumed, the DMN reported.
The new concerns allege the company has employed unqualified lab workers and allowed samples to be contaminated. The federal report indicates the deficiencies could cause serious harm or death.
“Nova Labs is committed to operating in accordance with federal and state regulations,” CEO Blake Anderson said in a written statement provide…
Read more

Air Force Two was forced to turn around shortly after taking off from New Hampshire after striking a bird, a White House official said Tuesday.
The plane returned to Manchester Airport out of an abundance of caution, the official said. Vice President Pence and staff traveling with him were expected to return to Washington, D.C., on a cargo plane.
Pence was in the Granite State for a campaign rally at Laconia Airport on Tuesday afternoon. The Trump campaign has eyed New Hampshire as one of just a few states it could flip from blue to red in November.
Tuesday's mechanical issue is the latest travel snafu the vice president has had since he was added to the GOP ticket in 2016.
His campaign plane slid off the runway at Laguardia Airport in New York City while he was on the trail in 2016. The vice president and others on board were not injured.
The vice president's campaign bus was also involved in a minor accident in late July during a tour of Pennsylvania. An official characterized i…
Read more

The Texas Restaurant Association is requesting proof that Texas bars and restaurants are responsible for spreading COVID-19. The organization announced Friday it has submitted seven public information requests to local elected officials and health departments in the state’s four largest metro areas. The requests seek information about where people have contracted COVID-19, how many people contracted COVID-19 at a restaurant, contact tracing questions, and internal or external correspondence related to those items.
The TRA submitted the public information requests after reports recently surfaced from Nashville about local officials possibly hiding data indicating that few of that city’s COVID-19 cases had come from bars or restaurants. Even knowing this information, they kept bars and restaurants locked down, causing significant loss to businesses and jobs.
“Unsupported claims that disparage restaurants, or any businesses, draw out our recovery to the point that many local businesses wil…
Read more

Facebook announced Monday that 2.5 million U.S. users have registered to vote in the upcoming general election through Facebook, Instagram and Messenger.
The number is more than halfway towards Facebook's goal, announced earlier this year, of registering 4 million U.S. users to vote ahead of November.
The registrations were announced as part of a kickoff of what Facebook described in a blog post as a “week of action” meant to highlight National Voter Registration Day on Tuesday.
“With six weeks until Election Day and registration deadlines fast approaching in many states, this week we’re putting the full force of our platform behind this campaign to empower every eligible voter to make their voice heard in this election,” the company wrote in the blog post.
As part of the effort, Facebook will continue showing users in the U.S. information about how to vote and register at the top of their news feeds through Friday, and on Monday kicked off a “More Questions, More Answers” campaig…
Read more