Trump 'all in favor' of background checks 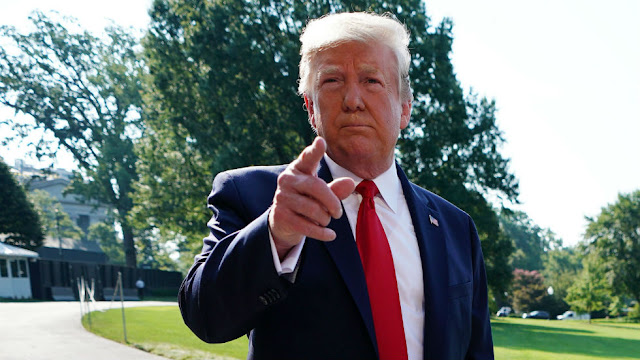 President Trump on Wednesday said he's "all in favor" of background checks for weapon purchases after recent mass shootings, but threw cold water on the prospect of banning high-powered weapons that have been used in several massacres.

"I'm looking to do background checks," he told reporters. "I think background checks are important. I don't want to put guns into the hands of mentally unstable people or people with rage or hate. Sick people. I'm all in favor of it."

He indicated there would be little movement on legislation to ban high-powered weapons like the one used in Dayton, Ohio, on Sunday and other mass shootings.

"You have to have a political appetite within Congress, and so far I haven’t seen that," Trump said.

"I think there’s a great appetite to do something with regard to making sure mentally unstable, seriously ill people aren’t carrying guns, and I’ve never seen the appetite as strong as it is now," he added. "I have not seen it with regards to certain types of weapons."

The president fielded questions from reporters as he left the White House to meet with first responders and officials in Dayton and El Paso, Texas, the site of another mass shooting on Saturday.

Trump's position on new gun laws has been murky in the aftermath of the violence, and he has reversed course following other massacres during his presidency.

Trump said Wednesday that Democrats and Republicans are "very different" on the issue of gun laws. He said he would encourage lawmakers to return from recess to address the topic only if they appeared close to a deal.

Sens. Pat Toomey (R-Pa.) and Joe Manchin (D-W.Va.) have separately spoken with the president about renewing support for their bill that would expand background checks to include all commercial gun sales.

But it's unclear how many other Senate Republicans would get behind new background check legislation.

House Democrats passed legislation earlier this year that would expand background checks, but Senate Majority Leader Mitch McConnell (R-Ky.) has not brought it up for a vote.

Trump expressed confidence Wednesday that he could persuade Republican lawmakers to support such a bill.

"I have lot of influence with a lot of people, and I want to convince them to do the right thing," he said. "And I will tell you, we’ve made a lot of headway in the last three days."

Gun control has traditionally been a divisive issue among lawmakers, with Democrats pushing for stronger restrictions on certain types of weapons and increased requirements to obtain a gun. Republicans have opposed any measure seen as limiting access to guns.

Trump's own positions on the subject have been unclear at times. He tweeted Monday that he would support "strong background checks" but didn't mention it during a 10-minute speech addressing the latest mass shootings.

The president initially backed background checks and increasing the minimum age requirement to purchase certain types of guns after a shooting at Marjory Stoneman Douglas High School in Parkland, Fla., but he eventually backed away from that idea in favor of "hardening" schools with added security amid pressure from the National Rifle Association.

After the shootings in El Paso and Dayton over the weekend left more than 30 people dead and dozens of others wounded, certain measures appear to be gaining bipartisan traction.

Trump and some Senate Republicans have backed "red flag" laws that would make it easier for law enforcement to obtain a court order to confiscate weapons from individuals deemed a threat to themselves or others.