Trump administration: Children of some military members overseas will not get automatic citizenship 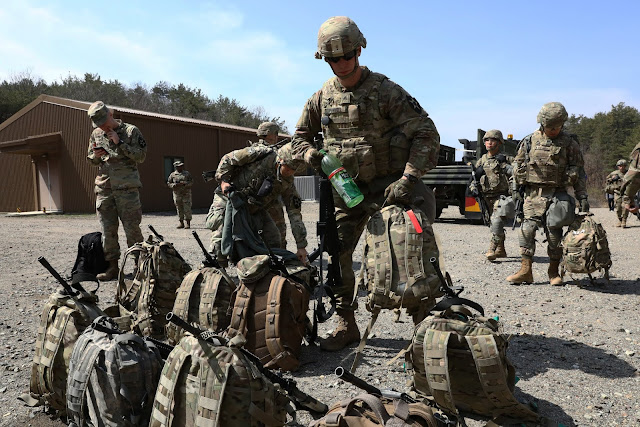 The Trump administration said Wednesday that the children of some U.S. military members and government employees working overseas will no longer automatically be considered United States citizens.

U.S. Citizenship and Immigration Services (USCIS) issued a policy that in some cases rescinds previous guidance stating that children of U.S. service members and other government employees abroad are considered “residing in the United States” and automatically given citizenship under a section of the Immigration and Nationality Act (INA).

The policy guidance issued Wednesday stated that USCIS “no longer considers children of U.S. government employees and U.S. armed forces members residing outside the United States as ‘residing in the United States’ for purposes of acquiring citizenship under INA 320.”

The rollout of the new rule quickly sparked widespread confusion, leading some to believe that many more individuals would be affected than in actuality.

“This kind of memo is the sort of thing that you don’t put out to the general public without a very bold-faced letter executive summary saying ‘Here’s what this does not do,’” said Bradley Moss, a lawyer with expertise in national security.

“This changes nothing if you are a child born overseas to two U.S. citizens on a military base or just overseas in general – you are fine as a matter of law … you are still considered a U.S. citizen so long as one of your parents had been a physical resident within the United States," he added.

Moss said that the pool of individuals who would be affected would likely be small.

The thrust of the memo, Moss surmised, is to prevent individuals who are either adopting a child born overseas to non-U.S. citizen parents or people who have little connection to the United States from “shoehorn[ing] their way into citizenship.”

Acting director of USCIS Ken Cuccinelli wrote on Twitter Wednesday evening that people were “freaking out over nothing,” describing the document as a “highly technical policy memo” used by career employees at the agency.

“This policy update does not affect who is born a U.S. citizen, period. This only affects children who were born outside the United States and were not U.S. citizens. This does NOT impact birthright citizenship," he said in a statement later released by USCIS.

"This policy update does not deny citizenship to the children of US government employees or members of the military born abroad. This policy aligns USCIS’ process with the Department of State’s procedure, that’s it.”

The new guidance will not apply to children who acquire citizenship at birth or while residing in the United States, the USCIS notice states. That includes children born abroad to U.S. citizens who have resided in the United States at some point in the past five years.

A Pentagon spokeswoman said in a statement to The Hill that the estimated impact of the change is "small" but that the Defense Department is working to provide further clarity for military families.

"DoD has been working closely with our colleagues as DHS/USCIS regarding recent policy changes and understands the estimated impact of this particular change is small. However, we are committed to ensuring affected families are provided the appropriate information, resources, and support during this transition," Pentagon spokeswoman Lt. Col. Carla Gleason said.

"Further information is available at the USCIS Military Resource Page, Military One Source, and via Service Legal Assistance branches as needed."

The new policy is aimed at children seeking to acquire citizenship through what is known as the derivation process, a fast-track to citizenship for children of U.S. citizens.

To derive citizenship, children must fulfill a residency requirement. Under previous regulations, living in a home abroad with their U.S. citizen parents fulfilled that requirement; the new rule will require that residence to be on U.S. soil.

These children will now need to apply for citizenship under Section 322 of the INA, which considers them as born and residing outside the United States. That provision requires them to apply for naturalization, which must be completed before the child turns 18.

The new policy will take effect Oct. 29, according to the USCIS notice.

“This move by the administration will make it harder for Americans serving our country overseas to have families,” wrote Rep. Val Demings (D-Fla.). “This also appears to be an initial step towards ending birthright citizenship, something which the president has threatened to do—and which would be unconstitutional."

A USCIS official told The Hill that the policy is being updated "because it conflicts with the definition of 'residence' in the INA and also with INA 322(d), which was enacted in 2008 after this policy was instituted and refers to children who are residing abroad with members of the armed forces of the United States as 'residing outside of the United States.'"

"In addition, the current policy conflicts with the Department of State guidance. Having conflicting policies can lead to inconsistent decisions on citizenship claims by USCIS and the Department of State and can cause confusion as to the date children of U.S. service members and government employees stationed abroad become U.S. citizens," the official added.