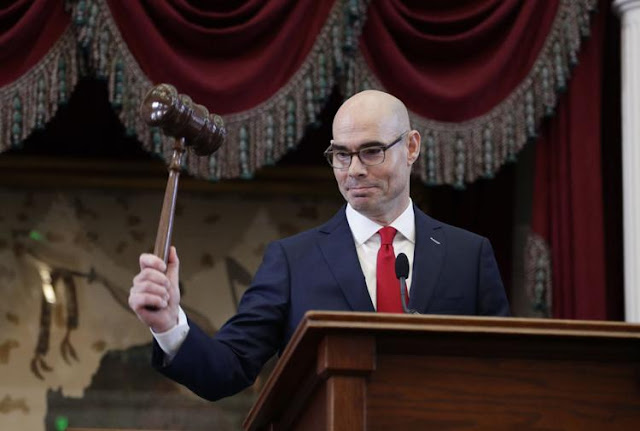 All five members of the committee, three Republicans and two Democrats, met privately to discuss an alleged quid pro quo proposal made by Bonnen to Sullivan, and after the Texas Democratic Party filed a lawsuit Thursday arguing their meeting violated state law and campaign finance regulations.

The lawsuit seeks a court order requiring Sullivan to produce a copy of the recording he made of the conversation, which also included Rep. Dustin Burrows, chairman of the House Republican Caucus.

The Democratic Party sued Sullivan as a member of an "unknown political committee," which Sullivan said was misguided. He tweeted that Bonnen "tried to make me a victim of an unethical quid pro quo scheme. I blew the whistle on it."

On Monday, the chairman of the committee, Rep. Morgan Meyer, R-Dallas, said, “The chairman and the members of this committee agree that it is the committee’s intention in adopting the motion that any investigation should follow the facts and the evidence without regard to political considerations.” He added that their request for a report after the investigation “is in addition to and not in lieu of any other reports or referrals.”

Other members of the committee, including Committee Vice Chair Nicole Collier, D-Forth Worth, Matt Krause, R-Fort Worth, Candy Noble, R-Allen, and Leo Pacheco, D-San Antonio, were in agreement with Meyer.

During the June 12 meeting, Sullivan alleges that Bonnen told him “He would ensure Texas Scorecard reporters received House floor access in 2021 if we would lay off our criticism of the legislative session, not spend money from our affiliated PACs against certain Republicans, and – most shockingly – go after a list of other Republicans in the 2020 primary elections.”

Empower Texans’ Texas Scorecard Capitol bureau has been denied media credentials over the last two years by the House, despite having it granted by the Senate. Empower Texans filed a federal lawsuit on the matter, which is before the 5th Circuit Court of Appeals.

“Empower Texans has long operated as a news-media entity,” Sullivans said. “Our focus on providing information that empowers citizens to exercise their rights as a self-governing people has taken the form of reporting on the actions of lawmakers – especially in exposing the difference between what they say and what they do.”

In May, Bonnen told the news media he was instituting a policy of banning members from engaging in electoral campaigns against each other, preventing legislators from endorsing, financially contributing, or otherwise assisting in races against incumbent members, including Republicans. The Houston Chronicle reported, “the warning applies to members of both parties and those who serve as party chairs.”

Sullivan’s group rejected Bonnen’s offer in a letter, to which Bonnen replied, denying in writing Sullivan’s recollection of the meeting. He was unaware that Sullivan had recorded it.

The exposure of an alleged hit list caused a backlash on the Capitol, resulting in Bonnen emailing an apology to state legislators last week. Bonnen wrote that he "said terrible things that are embarrassing to the members, to the House, and to me personally. You know me well enough to know I say things with no filter."

He asked for "forgiveness," saying, "I hope to rebuild your trust," and called on Sullivan to release the recording. Sullivan has only played it for only a handful of people.

"At what point will he apologize for lying to the public and his #Txlege colleagues?" Sullivan tweeted in response. "When will he apologize to me for putting me in the position of hearing his unethical proposal?"

Republican Rep. Travis Clardy, who ran against Bonnen for speaker, said he listened to the recording and that it confirms the political hit list, which includes him. He called the conversation "repugnant."

The Democratic lawsuit alleges that “Offering a public benefit in a scheme to support the election or defeat of a candidate – the offer of press credentials giving writers access to the House floor – is illegal under state law and campaign finance law.”

The ongoing scandal over the freshman speaker’s comments comes at a time when Republicans have seen their once dominant majority eroded.

Republicans have held the 150-member state House since 2003, but Democrats have whittled away their majority to 16 seats. Republicans lost 12 seats in the last election and hold a narrow 83-67 majority in the Texas House.