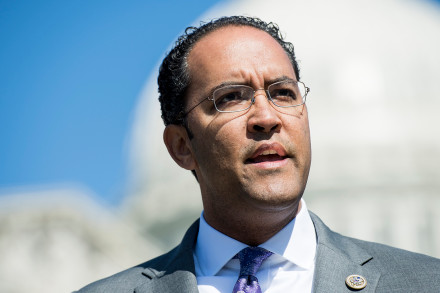 Rep. Will Hurd (R-Texas), the only African American Republican in the House of Representatives, announced Thursday night that he will not seek reelection in 2020.

"I have made the decision to not seek reelection for the 23rd Congressional District of Texas in order to pursue opportunities outside the halls of Congress to solve problems at the nexus between technology and national security," Hurd said on Twitter.

Hurd's abrupt decision to not seek reelection comes amid a period of flux inside the Republican Party. He becomes the sixth GOP lawmaker and third House Republican from Texas to announce his retirement in the past two weeks.

Mike Conaway, another GOP lawmaker from Texas, announced Wednesday that he would not seek reelection. Pete Olson also announced his retirement last month.

Hurd said in statement that he left a job in the CIA to run for Congress in 2014 to help give the lower chamber leadership in areas related to intelligence and national security.

"While Congress has a role in these issues, so does the private sector and civil society," he said. "After reflecting on how best to help our country address these challenges, I’m leaving the House of Representatives to help our country in a different way."

Hurd added that he would continue to remain in politics to "help make sure the Republican Party looks like America."

Hurd represents a congressional district that stretches along the U.S.-Mexico border between San Antonio and El Paso. The seat has flipped between Republicans and Democrats five times since the 1990s, The New York Times has noted.

The district voted for Democratic presidential nominee Hillary Clinton in 2016, the same year Hurd won reelection to his second term.

Hurd narrowly held onto his seat in 2018, fending off a challenge from Democrat Gina Ortiz Jones. Following Hurd's retirement, the 23rd Congressional District moved from toss-up to lean Democrat, according to Crystal Ball House ratings. The Cook Political Report rates Hurd's district as "Republican Toss Up."

Jones launched a 2020 campaign for Hurd's seat in May.

Hurd has shown a willingness to criticize President Trump. He was one of the four House Republicans last month to vote to condemn Trump's attacks against a group of minority congresswomen as racist.

But Hurd has said that he will vote for Trump again if he is the Republican nominee in 2020. He reiterated his position to The Washington Post in an interview on Thursday.

"Hurd has been a lockstep supporter of the worst of Washington Republicans’ policies and he sealed his fate when he pledged to vote for Donald Trump in 2020," DCCC spokesman Avery Jaffe said. "Democrats will win this seat and if Will Hurd doesn’t believe he can keep his job in a changing Texas, his colleagues must be having second thoughts too."

Texas Democratic Party Executive Director Manny Garcia suggested in a statement that Hurd's retirement stemmed from knowing "his time was up."

“The simple facts are that hypocrite Trump Republican Will Hurd did not stand a chance in the 23rd congressional district," Garcia said. "Texas Democrats are rising up everywhere, clearly Will Hurd knew his time was up."

"Contrary to what the pundits will tell you, this is an R+1 district and we will fight tooth and nail to ensure it remains in Republican hands in 2020," Emmer said in a statement.