Soaring deficits could be problem for Trump 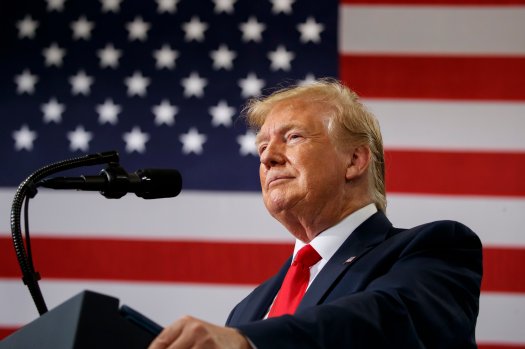 A sea of red ink may make it politically difficult for President Trump and Congress to use the traditional tools for stimulating growth if a recession kicks in sometime next year.

Cutting taxes and increasing spending are seen as ways of stimulating the economy to recover from a recession, but that could be difficult with an annual budget deficit soaring above $1 trillion — at a time of positive economic growth.

“There may not be the political appetite to borrow more,” says Marc Goldwein, the head of policy at the non-partisan Committee for a Responsible Federal Budget (CRFB), which advocates for lower debt.

The debt is already on track to hit 100 percent of the nation’s gross domestic product in the coming decade, and more negative news came Wednesday from the non-partisan Congressional Budget Office.

It said last year’s sweeping budget deal raising spending ceilings in 2020 and 2021 would add $1.7 trillion to the U.S. deficit over the next decade. That comes after Trump signed a giant tax cut into law that lowered the corporate tax rate.

Fears of a recession have grown in recent weeks, as bond markets flashed a tell-tale warning sign known as an inverted yield curve, just as growth projections around the world have fallen. Analysts at Bank of America said the chances of a downturn in the next year had increased from a fifth to a third.

That concern has raised worries about how fiscal policy has been handled since Trump took office.

“What Trump has done is increase the size of the deficit at a time that the economy is very strong, so that’s compromised our public finances,” said Desmond Lachman, a resident fellow at the right-leaning American Enterprise Institute.

The better approach, he says, would have been to lower deficits during boom times, restocking the fiscal arsenal for when things get tough. When spending is already high and taxes are low when a recession hits, there’s less room for maneuver.

“That’s really very bad because when you’re trying to provide the economy with support, give it a fiscal boost, you’re in a box,” he said.

Fiscal hawks have been sounding that alarm as one deficit-financed policy after another have passed through Congress and reached Trump’s desk.

“Between the budget deal, the tax cuts, and other recent unpaid-for legislation, policymakers have roughly doubled near-term deficits over just the past few years,” CRFB President Maya MacGuineas said.

“Shame on them for not instead reducing projected debt to give us more room to fight the next recession and manage the aging of the population,” she added.

Lachman and other experts say the problem is likely to be as much about politics as economics.

“The sky’s not falling, it’s not going to lead us to a big crisis. But there will be more concern that we can’t get deeper into debt, so it will be more difficult to use budget stimulus,” said Lachman.

When the Great Recession hit over a decade ago, there was a severe political backlash to the stimulus legislation signed into law by President Obama.

Some economists at the time argued the stimulus should have been even larger, and might have been had it not been for the political resistance. At that point, the country’s debt burden was less than half its current level.

A 2017 study by former Council of Economic Advisers Christina Romer and her husband, economist David Romer, found that countries that have high levels of debt are more reticent to stimulate their economies when a recession hits, in part for political reasons.

“Countercyclical fiscal policy has become so politically controversial that policymakers might refuse to use it the next time a country faces a crisis,” they wrote.

That, says Goldwein, can lead to deeper, longer recessions.

“High debt countries have less fiscal space, and so they do less to combat the recession. As a result, the economy recovers more slowly and less completely,” he said.

Already, conservative groups are warning that high deficits and debt will make it difficult to spend when the next recession comes.

“The spending-to-GDP ratio is set to rise nearly as high as it was during the 2009 recession. This will have catastrophic consequences for the United States economy when the debt crisis hits, as interest rates rise and private investment is crowded out,’ said Jason Pye, vice president of legislative affairs for FreedomWorks, a conservative group.

Some do say the potency of that argument has been lost in recent years as Republicans — led by the Speaker Paul Ryan (R-Wis.), who had previously been seen as a budget hawk — pushed through a tax law that added $1.9 trillion to the deficit over a decade, and agreed to higher levels of non-defense spending to match their own demands of increased defense funds.

“They were able to wield the debt and deficits as quite a scare tactic 10 years ago. I'm not sure they'd be able to do the same today. Their true colors on that issue have been exposed,” said one House Democratic aide.

According to Pew, the number of Americans who say the deficit should be a top priority in Washington has fallen from a high of 72 percent in 2013 to 48 percent this year.

Even if the politics are put aside and the government uses its fiscal tools to fight the recession, the current levels of debt mean they will face a more daunting problem on the other side.

“We can probably bear this one, but I’m not sure we can continue to bear this level of debt,” says Goldwein.

At that point, policymakers will face even tougher choices on what spending to cut and taxes to raise, even as a larger proportion of annual spending is sucked up by interest payments.
National