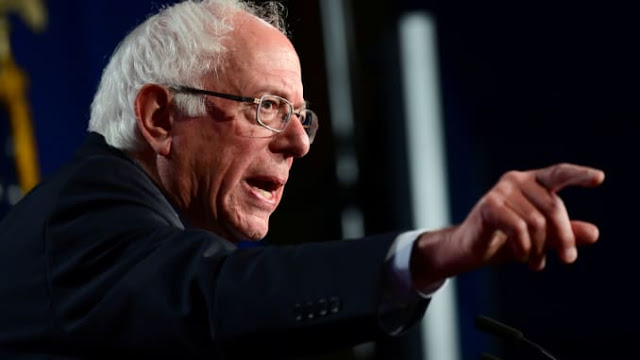 Sanders, decrying the mega-mergers he says have led to a handful of large corporations acting as gatekeepers for the information most Americans receive, calls for concrete steps “to rebuild and protect a diverse and truly independent press so that real journalists can do the critical jobs that they love” in an editorial for the Columbia Journalism Review.

"Today, after decades of consolidation and deregulation, just a small handful of companies control almost everything you watch, read, and download, Sanders writes. "Given that reality, we should not want even more of the free press to be put under the control of a handful of corporations and 'benevolent' billionaires who can use their media empires to punish their critics and shield themselves from scrutiny."

Sanders proposes policies to better protect both local and national independent journalism. The plan includes undoing moves by the Trump administration that have made corporate media mergers easier to complete and an immediate freeze on major media mergers until their effects on the free press can be studied.

“In the spirit of existing federal laws, we will start requiring major media corporations to disclose whether or not their corporate transactions and merger proposals will involve significant journalism layoffs,” Sanders writes.

“We will also require that, before any future mergers can take place, employees must be given the opportunity to purchase media outlets through employee stock-ownership plans—an innovative business model that was first pioneered in the newspaper industry,” he adds.

Sanders would also bar mergers or deregulatory actions that would disproportionately affect people of color and women. Sanders cites research from the non-profit Free Press that those groups are “woefully underrepresented” among holders of broadcast licenses.

Sanders would also appoint leaders to the Federal Communications Commission to reverse Trump-era rules on media ownership, which, allowed cross-ownership of television, radio stations and newspapers as well as one group to control multiple stations in one market.

The plan comes after Sanders’ criticism of Amazon founder and Washington Post owner Jeff Bezos. Sanders has clashed with Bezos over Amazon's wage and employment policies and earlier this month suggested that Bezos’ ownership of the Post has affected its coverage of his campaign. Sanders has also criticized CNN’s coverage of the 2020 race during the Democratic presidential debates.

"Sen. Sanders is a member of a large club of politicians — of every ideology — who complain about their coverage,” Post executive editor Marty Baron said. “Contrary to the conspiracy theory the senator seems to favor, Jeff Bezos allows our newsroom to operate with full independence, as our reporters and editors can attest.”

“News outlets owned by Disney and Jeff Bezos may happily tout Disney films and Bezos’s plans for space exploration, but we cannot count on them to consistently and aggressively cover workers’ fight for better wages at Disney- or Bezos-controlled companies,” Sanders writes. “In fact, in one instance, we saw that The Washington Post, which Bezos owns, tried to punish a reporter because he spoke out for better wages at the newspaper."