Remember when Barack was thinking about dumping Joe for Hillary 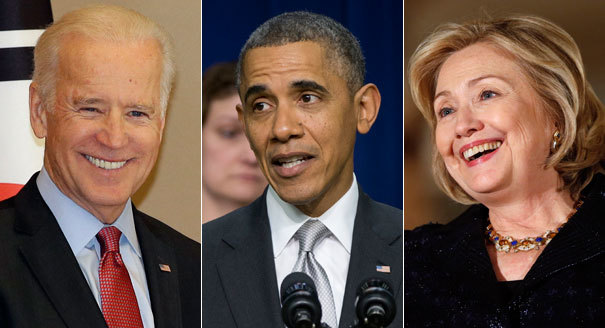 No doubt Joe Biden is running as the “Defender and the Inheritor of the Obama Legacy” – even if he doesn’t do so with any particular strategy. When Biden realizes he’s in trouble in front of a Democratic audience, he invokes Obama, and hope that makes the trouble go away.

No doubt Biden feels close friendship and affection for Obama, and vice versa. But any rival of Biden who is tired of Biden “invoking Obama when it’s convenient, dodging it when it’s not,” as Cory Booker put it, could have some fun pointing out all the times the Obama-Biden partnership didn’t run so smoothly.

“Shoot. Me. Now.” [then-Senator] Obama wrote to an aide, in the middle of a particularly long-winded oration. (The speaker was Joe Biden.)
During an Obama speech on the debt in April 2011, Biden appeared to fall asleep.

When asked about a Biden comment the “there’s still a 30 percent chance we’re going to get it wrong,” regarding the stimulus, in February 2009, Obama joked that he often didn’t understand what Biden was talking about: “I don’t remember exactly what Joe was referring to, not surprisingly.”

Later, Obama tried to put their disagreements in the best possible light: “There’s, I think, an institutional barrier sometimes to truth-telling in front of the president,” Obama said. “Joe is very good about sometimes articulating what’s on other people’s minds, or things that they’ve said in private conversations that people have been less willing to say in public. Joe, in that sense, can help stir the pot.” (This is probably the best possible way to characterize frequent disagreements.)

Biden announced his support of gay marriage without telling Obama or his advisers first, irritating them.

Biden thought about running in 2016, but got no encouragement from Obama, which he and his allies interpreted as a “painful if silent rebuke.”

This doesn’t mean that Obama and Biden aren’t close friends, or that they didn’t work closely for eight years. During his eulogy for Beau Biden, Obama told the grieving father, “Joe, you are my brother.” But if Joe Biden is going to characterize himself as the de facto third term of Barack Obama, then their disagreements and sore spots are fair game.