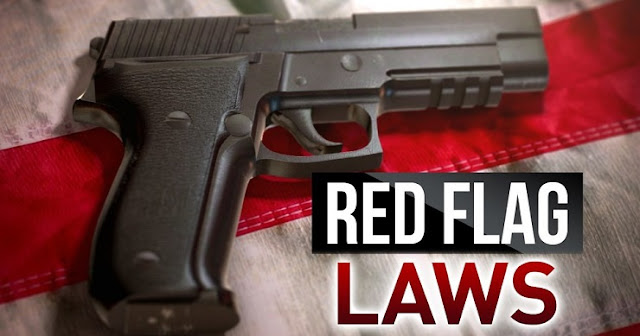 In the wake of the latest mass-murder attacks by gunmen in El Paso and Dayton, so-called “red-flag” laws have come to the forefront of the public debate. Such laws would permit state governments, with federal encouragement, to deny firearms to people whom a judge finds solid grounds to believe may be unstable.

Concerns that these laws would impinge on the right to lawful gun ownership are understandable but overblown.

I say that as a Second Amendment advocate. The rights of self-defense and self-determination are not given to us by the Constitution; they are natural rights that the Constitution safeguards. They are vital to liberty. Indeed, we can be confident that the Constitution would not have been adopted in the first place if the states and the people were not satisfied that the right to keep and bear arms was guaranteed.

Nevertheless, no constitutional right is absolute. And many are highly qualified: On its face, for example, the First Amendment may appear to brook no congressional burdens on free expression; yet, that liberty has always been understood to be limited by laws against libel, profanity and incitement, as well as time, place and manner restrictions.

What the Constitution ensures is that our basic rights may not be denied by the government absent due process of law. The Constitution does not insulate our rights from all regulatory burdens, or from denial in all instances.

Sometimes, the due process burden on government is extraordinarily high. In criminal prosecutions, for example, in which the stakes include the extensive loss of our most precious rights to liberty and property (and, in capital cases, the right to life itself), the government must establish guilt beyond a reasonable doubt at trial. An accused, moreover, is accorded a broad array of due process protections — the right to counsel, to confront witnesses, to present a defense, to testify or choose not to do so, to be charged only if a grand jury approves, and so on.

But when the rights at issue, even though significant, are fewer or of less consequence, due process demands less. Our liberty may be deprived by arrest, for example, or the privacy of our home deprived by search, based on a police showing of mere probable cause that a crime has been committed or that evidence is being concealed. Our Fifth Amendment right against self-incrimination, to take another obvious example, does not excuse us from accounting for ill-gotten gain in the compulsory filing of tax returns (though we are not necessarily obliged to say where the money came from).

This kind of line-drawing, which balances individual rights against community interests, is a constant feature of life in a free society. No person is immune from it, and no individual right — as we’ve seen, not even life itself — is insulated from it.

One complaint about the potential injustice of red-flag laws is that they are too “predictive.” That is to say: How do we really know that a person presents such a peril that the denial of his Second Amendment rights can be justified in the absence of criminal or other disqualifying conduct?

To be sure, we’re only human and our powers of prognostication are highly fallible. It is certainly possible that a person could be unjustly deprived of firearms rights, just as a person can be unjustly convicted, or falsely arrested. Nevertheless, the fact that mistakes and abuses are inevitable does not mean they are routine — we know they are not. And the fact that we cannot predict the future with certainty does not render us unable to address its plain-as-day possibilities responsibly. Indeed, we are obliged to do so.

To take a fitting example, the Constitution’s Eighth Amendment guarantees that, when a person is accused of a crime, “[e]xcessive bail shall not be required.” This constitutional safeguard is commonly thought of as a “right to bail.” But the right is importantly qualified. A judge may deny bail on a showing that the accused is a flight risk. We certainly do not know ahead of time whether the accused, if granted bail, will abscond. Yet judges routinely make this determination, scrutinizing the accused’s roots in the community, ties to other jurisdiction, and means and motive to flee. It is not an exact science, but we do the best we can. We make sure the accused is vested with due process rights to contest the prosecution’s claims, and the system works well. Not perfectly, but well. There is no perfect in this vale of tears.

Beyond that, notwithstanding the Eighth Amendment, federal law also permits pretrial detention if a judge finds the accused is a “danger to the community” —  meaning, the accused is too great a risk to intimidate witnesses or significantly threaten the peace if released on bail. Again, there are significant due process protections, the government must provide clear and convincing evidence, and the accused may appeal a detention ruling to a higher court. That the judgment involved is predictive does not make it infirm.

We know that under federal law, there are many circumstances short of a criminal conviction that justify the denial of firearms rights. For example, under Section 922 of the federal penal code, it is a felony to transfer a firearm to a person who (a) is under indictment, (b) is a fugitive from justice (even if not convicted), (c) is a drug addict, (d) has been adjudicated a “mental defective,” (e) is an illegal alien, (f) is a legal alien admitted on a nonimmigrant visa, (g) has been dishonorably discharged from the armed forces, (h) has renounced his U.S. citizenship, or (i) is subject to a restraining order.

The last category is worth pausing over. The bar against the transfer of a firearm applies only if the restraining order was issued with significant due process protections: (1) there was a proceeding at which the person restrained was given notice and a meaningful opportunity to object, and (2) the court found that the person restrained posed a credible threat to the physical safety of, or expressly prohibited the use of force against, an intimate partner or child.

Again, constitutional rights, very much including Second Amendment rights, are subject to reasonable restrictions — and what’s reasonable could permissibly be severe, depending on the circumstances. It is no argument to complain that such restrictions involve predictive judgments; all lawful prior restraints do. It is no argument to complain that judges could abuse their powers or otherwise make bad calls. Again, that is always a possibility, and it is why appellate review is a staple of our judicial system.

If legislatures compose red-flag laws with sufficient due process rights, it would be unreasonable to oppose them. They would represent a meaningful precautionary step, which the public favors after too many massacres. They would not burden the vast majority of law-abiding gun owners. And if reasonable action is not taken, it will become increasingly difficult to stave off unreasonable restrictions — which are favored by many Democrats and much of the judiciary.

So let’s be reasonable.