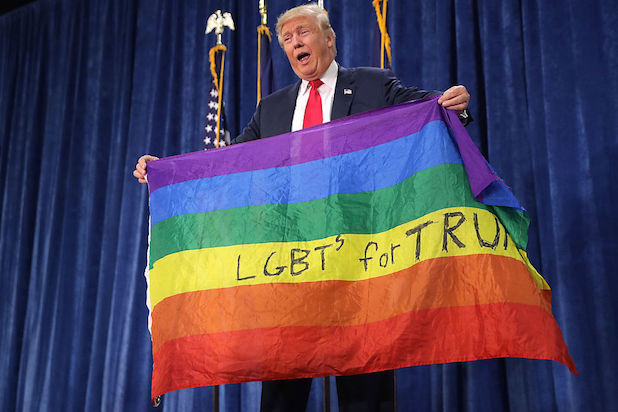 The group said its national board of directors voted to endorse Trump after consulting with its chapters across the country.

Log Cabin Republicans Chairman Robert Kabel and Vice Chairwoman Jill Homan argued in a Washington Post op-ed on Friday that Trump has helped remove LGBTQ rights as a wedge issue in the GOP, citing his administration's policies on ending the spread of HIV/AIDS as well as his push to get other countries to conform to modern human rights standards.

The leaders also cited Trump's appointment of Richard Grenell, who is openly gay, as U.S. ambassador to Germany.

"While we do not agree with every policy or platform position presented by the White House or the Republican Party, we share a commitment to individual responsibility, personal freedom and a strong national defense," Kabel and Homan wrote.

The move marks a reversal after the group refused to endorse Trump in 2016, citing him surrounding himself with advisers "with a record of opposing LGBT equality," as well as his support of the First Amendment Defense Act, which would block the federal government from taking adverse action against people based on their beliefs about marriage.

The group said in 2016 that they would welcome the opportunity to work with him on LGBTQ issues.

While Trump has referred to himself as the “most pro-LGBT presidential nominee in the history of the Republican Party," his commitment to the LGBTQ community has come under scrutiny.

The Trump administration formally reversed the Obama-era policy of allowing transgender individuals to openly serve in the armed forces and receive access to gender-affirming psychological and medical care earlier this year. The Log Cabin Republicans pressed the administration to reverse that ruling, saying that the move "weakened" U.S. readiness.