Like it or not, media is doing its job 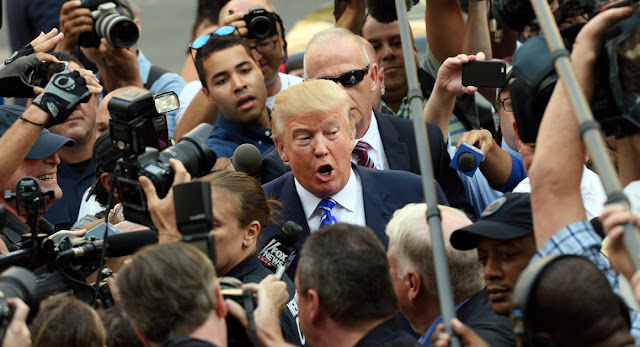 "Only a free and unrestrained press can effectively expose deception in government. And paramount among the responsibilities of a free press is the duty to prevent any part of the government from deceiving the people."

“Were it left to me to decide whether we should have a government without newspapers, or newspapers without a government,” Thomas Jefferson wrote more than 200 years ago, “I should not hesitate for a moment to prefer the latter.” The most effectual mechanism for insuring a society governed by reason and truth, Jefferson would add, is a free press: “It is therefore the first shut up by those who fear the investigation of their actions.”

Jefferson was prescient. These days, President Donald Trump, members of his administration, talk radio hosts, Fox TV partisans, and social media outlets have attempted to diminish Americans’ trust in mainstream journalism through allegations of bias, “fake news,” and alternative facts circulated by “enemies of the people.”

Fortunately, they have not succeeded in shutting up the press.

Several recent examples should serve to remind us how indispensable, responsible, accurate, and decidedly un-“lamestream” our news media have been:

In a series of articles entitled “Perversion of Justice,” published in November 2018 in the Miami Herald, investigative reporter Julie K. Brown persuaded several women to speak on the record about Jeffrey Epstein’s “cult-like network of underage girls,” who were coerced into having sex in his opulent waterfront mansion.

Relying on thousands of emails, court records, FBI files, and interviews, Brown also examined the role of Alex Acosta, the U.S. Attorney in Miami in 2008 who brokered a deal that granted immunity to “any potential co-conspirators,” allowed Epstein to plead guilty to two prostitution charges in state court, pay restitution to three dozen individuals, and serve a brief sentence, during which he was allowed to leave jail six days a week for twelve hours a day and work in his West Palm Beach office.

By failing to inform the alleged victims of the terms of agreement, Brown and her colleagues indicated, Acosta, who in 2018 was U.S. Secretary of Labor, may have violated federal law. And the plea deal “essentially shut down an ongoing FBI probe into whether there were more victims and other powerful people who took part in Epstein’s sex crimes.”

In announcing charges against Epstein for sex trafficking in July 2019, Geoffrey Berman, U.S. Attorney for the Southern District of New York, acknowledged that federal prosecutors “were assisted by some excellent investigative journalism.” The fallout, of course, continues. Acosta resigned as Labor Secretary in July. In August, Epstein apparently committed suicide. Most important, the likelihood that justice will be done has increased, substantially.

In dozens of stories, the mainstream media has played a pivotal role in bringing to public attention the Trump Administration policies and practices related to immigrants at the border with Mexico.

In 2018, reporters for the Washington Post cited internal Homeland Security documents indicating that filing criminal charges against immigrants and separating parents and children would be an effective deterrent to people attempting to enter the United States; they also unpacked allegations that federal authorities had lost track of nearly 1,500 immigrant children in custody, with no proactive plan to reunite families.

Although government officials placed tight restrictions on journalists touring detention facilities, ProPublica obtained audio recordings of children screaming “Mami” and “Papa,” while an agent joked, “We have an orchestra here.” In 2019, the New York Times told the “inside story” of “how America got to ‘Zero Tolerance’ on immigration,” (documenting misleading or incorrect claims by DHS Secretary Nielsen that “there was no policy of family separation”). The Times revealed as well that the “U.S. continues to separate migrant families.”

On July 30, 2019, the New York Times revealed that Rep. John Ratcliffe (R-Texas), President Trump’s choice for Director of National Intelligence, had “overstated parts of his biography,” including a claim that as a federal prosecutor he had convicted terrorists. Amidst concerns by Republicans as well as Democrats that Ratcliffe lacked national security expertise, Trump dropped his plan to nominate the congressman.

Ratcliffe joined a long list of selections — Andrew Puzder for Secretary of Labor; Ronny Jackson for Secretary of Veterans Affairs; Heather Nauert for U.N. Ambassador; Stephen Moore and Herman Cain for membership on the Federal Reserve Board — who withdrew from consideration following disturbing revelations about them unearthed by the media.

Questioned about the rigor of his administration’s vetting process, President Trump, who had declared without evidence that news organizations had treated Ratcliffe “very unfairly,” declared: “You vet for me. When I give a name, I give it out for the press, and you vet. A lot of times you do a very good job. Not always.”

This time, the president got it right. The mainstream media does do a very good job. Not always, of course, no person or organization can — but the vast majority of the time, it does.

In this era of conspiracy theories, spread by tweets, Russian bots, and partisan talking heads, professional journalists and editors committed to the facts and willing to speak truth to power deserve our respect and our trust.